The County of Maui is seeking to hire special counsel in a lawsuit that alleges fossil fuel companies are responsible for the impacts of climate change and rising sea levels.

Acting Mayor Sandy Baz submitted the proposed resolution on Tuesday on behalf of Mayor Michael Victorino, who traveled to Washington, D.C. to hear oral arguments before the US Supreme Court in the Lahaina injection wells case.

“Working together, the County Council and my administration can hold fossil fuel companies responsible for knowing about the disastrous environmental damage of burning petroleum products and releasing carbon dioxide into the earth’s atmosphere,” Victorino said in a press release.

“For nearly 50 years, these companies have known the truth. Instead, of taking action to inform the public and reduce harmful impacts, they kept the truth secret and launched a massive disinformation campaign to continue making billions of dollars in profits, while simultaneously protecting their own assets from environmental impacts they knew would be coming.”

The mayor has referenced a University of Hawai’i study, which states that West Maui is most at risk of economic loss from structures and land damaged by an anticipated 3.2 feet rise in sea level.

According to the study, West Maui damages are estimated at $1.9 billion.

“Special representation in this matter is important due to the complexity of litigation issues and the firm has significant expertise and experience in this area of environmental law,” the press release read.

“The evidence is piling up that just as big tobacco misled the public and policymakers about the danger of smoking, big oil waged a decades-long deception campaign and covered up the origins of today’s climate crisis,” Caldwell said in a press release.

“The people of O‘ahu expect government to stand up against those who knowingly harm others for financial gain, and that’s exactly what we intend to do.”

Maui County’s lawsuit has not been filed yet, and the identification of defendants is ongoing. 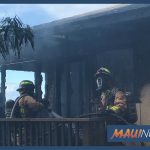 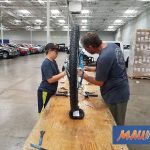