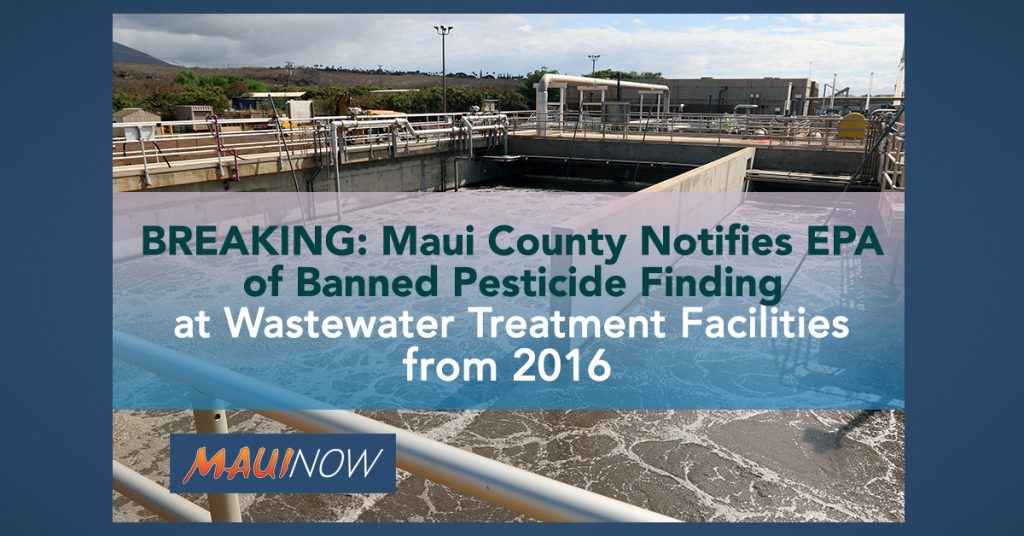 The chemical is a metabolite of methyl parathion, the active ingredient in Penncap-M, the same banned pesticide identified in the recent Monsanto case on Maui.

Last week, Monsanto Co. agreed to plead guilty to using, transporting and storing the pesticide at its South Maui facility in 2014.  The company also agreed to pay $10 million in fines and community service payments.

The 2016 test results were provided to the Health Department at that time. The tests for a wide variety of chemicals were done as part of a permit protocol.

“The highest concentration was found at the County’s wastewater reclamation facility in Kīhei, followed by Molokaʻi and Lahaina,” said Brian Perry, director of communications in the Office of the Mayor. “The Kīhei sample was taken on Oct. 4, 2016, and the Molokaʻi and Lahaina samples were taken on Oct. 18, 2016. The chemical was not found at the Kahului treatment plant. The same testing for a variety of chemicals in February, May and August of 2017 did not show the presence of nitrophenol.”

“The health and safety of our residents and visitors and protection of the environment are of utmost importance to Mayor Michael Victorino and his administration,” Perry said. “When the Monsanto news reports came out this week, wastewater technicians checked records and found that the chemical was found in samples in October 2016. Today, we reported this information to state health and EPA officials for whatever action they deem appropriate. We will fully cooperate with state and federal regulators in this matter.”

Mayor Michael Victorino said, “I applaud the vigilance of our wastewater personnel in detecting and reporting this finding. Now that this matter has resurfaced, we wanted the appropriate authorities and members of the public to be aware of the sample findings.”