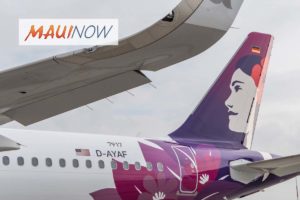 The celebrations, held in both cities today and yesterday, marked the start of the airlineʻs four-times weekly nonstop service between Fukuoka Airport and the Daniel K. Inouye International Airport on the Airbus A330 aircraft.

Travelers were treated to performances by the Hawaiian Airlines Serenaders music and hula troupe, as well as fresh lei and special keepsake, including a canvas tote and luggage tag commemorating the airline’s inaugural flight.

Hawaiian Airlines President and CEO Peter Ingram addressed guests in Honolulu to mark the return of service to its sister city.

The flight’s 8:45 a.m. scheduled arrival at HNL on the same day gives travelers the afternoon to explore O‘ahu or connect to one of Hawaiian’s seven neighbor island destinations.

“Fukuoka and Honolulu share a special relationship, so we’re thrilled to bring local residents of Kyushu and Hawai‘i one step closer to their vacation with our convenient nonstop service,” Panagiotoulias said in a press release.

“We’re pleased to now offer 35 weekly flights between Hawai‘i and five gateways in Japan with the launch of our new Fukuoka service.”

The carrier will begin additional daily service between Honolulu and Tokyo Haneda in March.