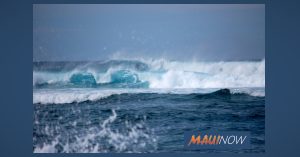 The warning is expected to remain in effect until 6 p.m. on Sunday, according to the National Weather Service.

“A high surf warning means that dangerous, battering waves will pound the shoreline,” an announcement from the county read. “This will result in very dangerous swimming conditions, and deadly rip currents.”

A long-period northwest swell is expected to steadily build through the day on Saturday and peak late in the afternoon and into the night.

Officials say the swell could gradually decrease on Sunday and into early next week.

Forecast surf heights are estimates of the height of the face or front of waves.

Officials warn that the heightened surf could impact coastal property and nearby roadways.

During these dangerous conditions, officials say, only highly experienced swimmers should enter the water. The public is urged to remain off beaches and beachfront areas.

“Anyone entering the water could face significant injury or death.”