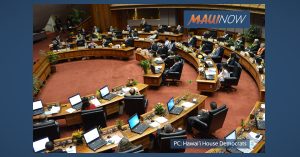 Today, legislators from around the country are unveiling a national bipartisan campaign to phase out corporate giveaways by establishing an interstate compact.

The proposal seeks to “liberate states from feeling like they have to participate in subsidy battles with other states, like the AmazonHQ2 process last year, by having states join together.”

In Hawai‘i, the bills have been introduced as SB2751 by Senator Mike Gabbard and as HB 1610 by Representative Roy Takumi.

“This legislation is a good example of the aloha spirit in action and doing things in a pono way”, Sen. Gabbard said in a press release.

“We should help end the practice of cities and states using tax dollars to lure big corporations to relocate there. This only makes these corporations richer at the expense of other communities who end up losing those jobs.”

As of today, the legislation has also been introduced in New York, Florida, Illinois, West Virginia and New Hampshire.

“A unified front to phase out corporate welfare is necessary to support every day citizens and small business.”

The legislation would bring each state into a formal agreement with other states to phase out corporate giveaways. There are two main provisions of the agreement.

Firstly, member states agree to end the practice of offering tax breaks to a facility located in another member state as an inducement to the company to move. Secondly, member states participate in a national board of appointees to discuss and propose enhancements to the existing agreement for future consideration by each state.

A similar bipartisan agreement among the governors of Missouri and Kansas reached over the summer to end corporate giveaways for companies moving within their shared Kansas City region demonstrates the shifting winds on using company-specific subsidies as an economic development policy.