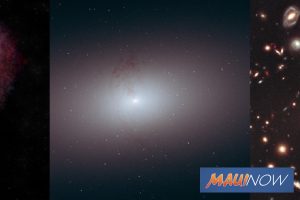 An international team of astronomers led by scientists at the University of California, Riverside, has found an unusual monster galaxy that existed about 12 billion years ago, when the universe was only 1.8 billion years old, or 13 percent of its current age of 13.8 billion years.

Using W. M. Keck Observatory on Maunakea, the team found that the galaxy, dubbed XMM-2599, formed stars at a high rate and then died. The astronomers did not determine why the galaxy stopped forming stars.

The study published today in The Astrophysical Journal.

“Even before the universe was 2 billion years old, XMM-2599 had already formed a mass of more than 300 billion suns, making it an ultramassive galaxy,” UC Riverside researcher Benjamin Forest said in a press release.

During their research, the team found XMM-2599 formed more than 1,000 solar masses a year in stars at its peak of activity — an extremely high rate of star formation.

In contrast, the Milky Way forms about one new star a year.

The team has been awarded more time at the Keck Observatory to follow up on unanswered questions prompted by XMM-2599.