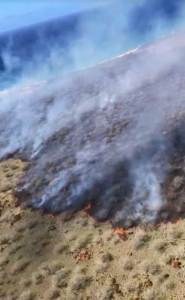 Maui fire crews are continuing to monitor a brush fire that broke out on the Southwest end of Kahoʻolawe on Saturday that has now burned 2635 acres, according to officials.

Fire officials say the fire was reported at about 10 on Saturday morning in Kealaikahiki. By 11:30 a.m., officials estimated that the fire had scorched about 100 acres and was moving in the mauka direction.

After conducting an aerial survey of the blaze at about 9:30 this morning, fire officials say 2635 acres are “actively burning” and that the fire is “not expected to stop anytime soon.”

No other aerial recon flight was scheduled today.

Officials say the department is cannot carry out firefighting efforts by land or air due to the unexploded ordnances.

The cause of the fire remains unknown.