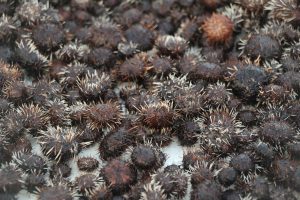 According to the DLNR, sea urchins are vital to aquatic life in Hawai‘i as consumers of invasive algae (seaweed). Invasive seaweed alters coral reef ecosystems by overgrowing and starving corals of light and can eventually kill the coral colony. When urchins eat invasive seaweed it allows the coral to regrow and opens up spaces for fish, native seaweed (limu) and invertebrates to utilize these areas that were previously overgrown by algae.

“We hope to see the same level of success in Waikīkī, to improve coral habitat and  expand healthy reef coverage in the most visible MLCD in the state,” DAR Habitat Monitoring Coordinator Wesley Dukes said in a press release.

“We pick the urchins out of barrels with the hatchery crew and then load 200 to 400 urchins on individual trays. From there, to a truck, to the beach, to boogie boards & floats and to their new homes and jobs grazing away patches of invasive seaweed,” Dukes explained.

During the first out-planting this week, the team out-planted 7,000 collector urchins. It takes four to six months at the hatchery for urchins to get big enough to go into the ocean.

“The Waikīkī  MLCD is our first expansion of the very successful project in Kāne‘ohe  Bay, where more than 500,000  urchins have been devouring invasive algae for the past 9-years. It is a proven, natural way to combat invasive species and we hope to enhance collector urchin populations at other locations statewide in the near future,” DAR Administrator Brian Neilson said.