Based on the award categories and overlapping qualifiers, a total of 11 Hawaiʻi middle school robotics teams have been invited to participate in the 2020 VEX IQ World Championships in Louisville, Ky., April 26-28. 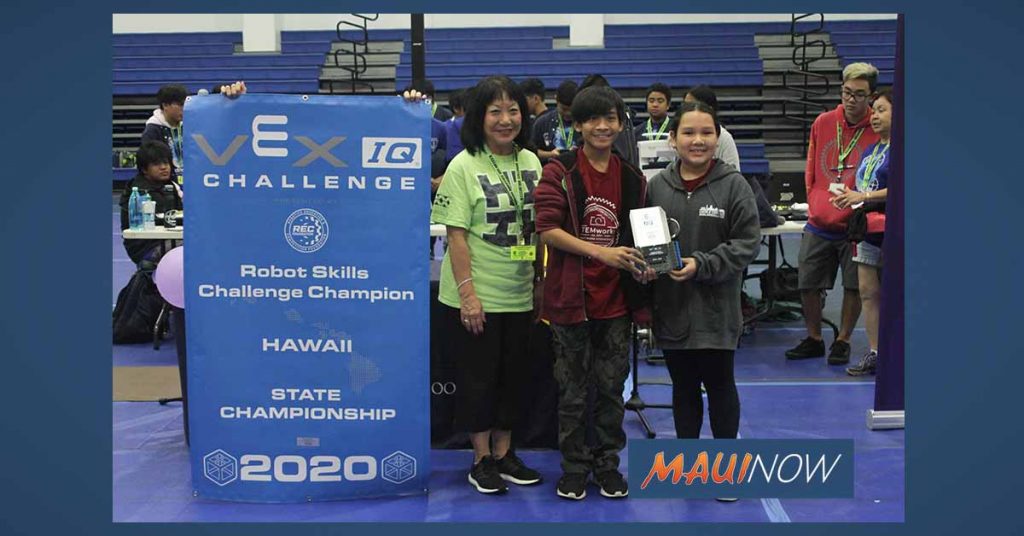 The top awards were:

The Excellence Award, the highest award of the competition, was awarded to Lancer Robotics 2437A of Sacred Hearts Academy. The award recognizes the top all-around team that demonstrates overall excellence in all components of the VEX IQ Challenge.

The Teamwork Champions was won by the two-team alliance of Saint Louis Schools’ Crusaders 2470C and 4270A, based on their robot performance in the finals match alliance.

The Teamwork 2nd Place Award was won by the two-team alliance of Mililani Masters 11173A, Corne stone Engineering Robotics and Architechs 96768A of Kamehameha Schools Maui.

The Robot Skills Champion, a robot performance award for the team with the highest combined top programming and top driving skills challenge score, was won by Maui Waena Robotics 10698A of Maui Waena Intermediate School.

The Design Award, for the team with the most effective and efficient robot design process, went to the Hawaiʻi Island-based Mechaneers 2718A, Hawaii Science & Technology Museum.

The STEM Research Project Award, presented to the team that shares the most effective STEM Research Project video presentation, was won by Saint Louis Schools’ Crusaders 4270B. Their 4-minute video (posted below) shared the scientific research undertaken to reduce trash in their school with the aid of their robot. The video was judged on how the team used the scientific method to collect data.

As a result of The Crusaders’ overlapping wins at the Mark Leon Invitational and Pan Pacific VEX IQ Championships, three teams earned a spot at the 2020 VEX IQ Worlds through their skills scores ranking: Waialua High & Intermediate’s Hawaiian Kids 359A and 359C, and Mid-Pacific Institute’s Owl Robotics 2932B.

A total of 39 Hawaiʻi VEX IQ teams from Hawaiʻi Island, Maui, Molokaʻi, and Oʻahu participated in the state middle school robotics championships, which has been sponsored by Hawaiian Electric since 2013. All VEX programs including elementary, middle school, and high school represent 367 teams statewide.

The 2020 VEX IQ Challenge, called Squared Away, is played on a 4’ x 8’ rectangular field. The object of the game is to attain as many points possible by scoring balls in or on cubes, and scoring cubes into corner goals or platforms. Two robots compete in the Teamwork Challenge as an alliance in 60-second matches, working collaboratively to score points. Teams also compete in the Robot Skills Challenge where one robot takes the field to score as many points as possible. The matches involve driving skills, which is entirely driver controlled, and programming skills, which is autonomous with limited human interaction.

For a full list of the middle school team awards, including Maui and Molokai teams, visit: https://www.robotevents.com/robot-competitions/vex-iq-challenge/RE-VIQC-19-8617.html and click on Awards.