BREAKING: 2 Homeless Individuals from Ka Hale A Ke Ola Moved to Quarantine, One is COVID-19 Positive 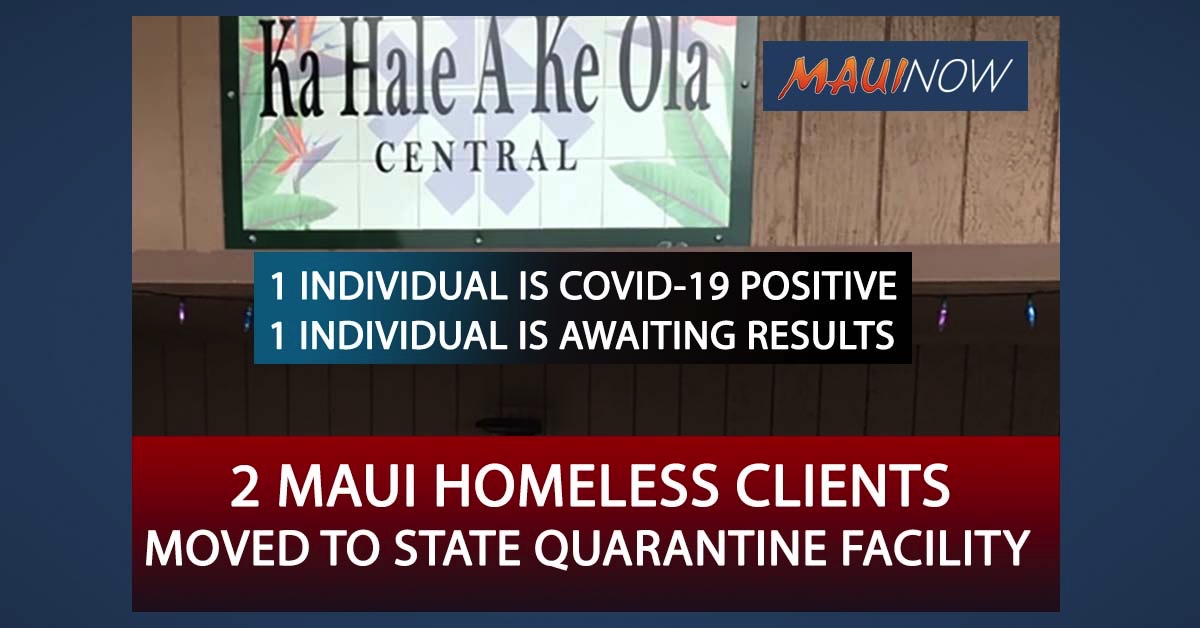 Facility Executive Director, Monique Yamashita said the first male individual was in a respite shelter and was doing well, but got a call from the Maui Memorial Medical Center because he was an inpatient there when the hospital cluster had occurred.  He went in for testing on Tuesday and was put into isolation on the Ka Hale A Ke Ola property while they awaited results.

The other male individual asked to get tested because he was not feeling well.  He was also put into isolation at the Wailuku facility.

On Wednesday night the state Department of Health called the facility confirming that the first individual had tested positive.  At around 12:30 p.m. on Thursday, state Health personnel picked up the two individuals and placed both off-site in a quarantine facility at an undisclosed location on island.

Yamashita said no other individuals have been identified with symptoms.  She said the Ka Hale A Ke Ola Homeless Resource Center in Wailuku houses 205 guests, which include a mix of adults and children.

According to Yamashita, staff that had interactions with the two guests underwent testing yesterday morning.  They will remain in isolation as the administration awaits expedited testing results.  The facility will await a doctors report to determine when staff could return to work.

Yamashita said the facility implemented safety measures weeks ago in anticipation of a worst case scenario.  As part of this plan, all of the men and women were taken out of the dormitory area because it did not meet the six-foot space requirement for social distancing.

The smaller women’s dorm was transformed into an isolation area, and was where the two quarantined individuals were initially held while awaiting results.

“I let the Department of Health know that we cannot have them on this property,” said Yamashita, noting that extra precautions were taken while the two were in isolation.  “Protocols were in place to minimize exposure to staff and guests on property,” said Yamashita.  While in isolation,  the individuals were asked to remain in the room and were notified when meals were available, while staff brought food and left it outside.

Yamashia has asked for testing of other guests, but that process is currently developing. She said individual testing would help to provide some assurance that the remaining guests are safe.

According to Yamashita, Dr. Lorrin Pang with the Maui District Health Office is expected to arrive on property today to answer questions and provide information on next steps at the facility.