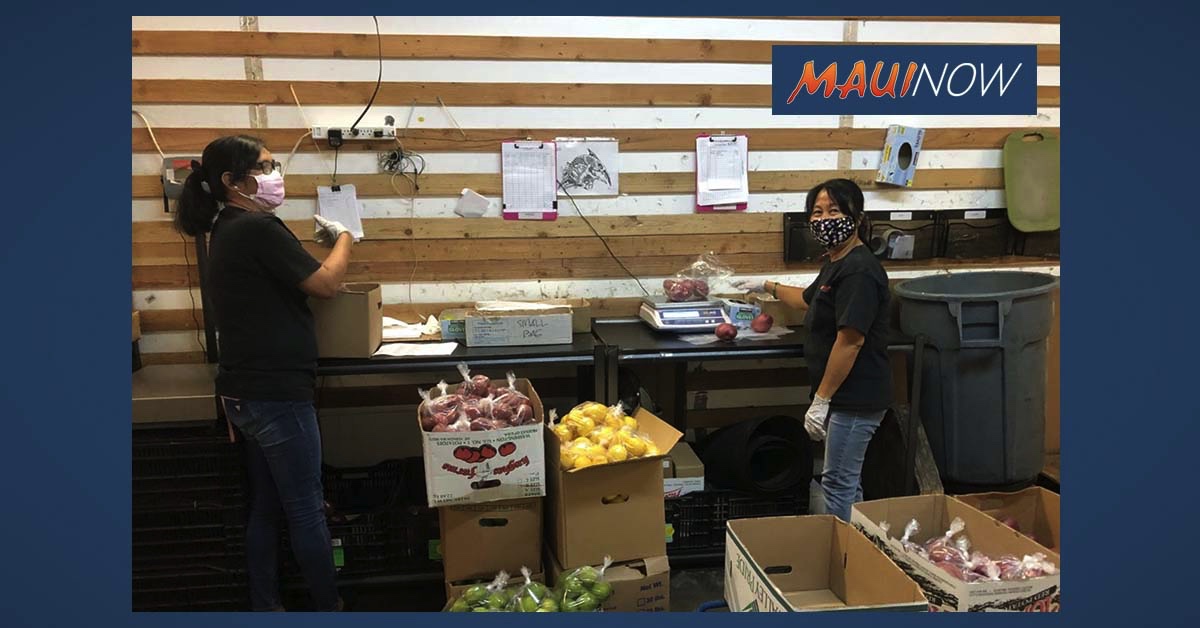 In a community-based response to a global crisis, a years-long dream was realized in just three weeks, with the launch of the Maui Food Hub, under the direction of the Hawai’i Farmers Union United, and in collaboration with farmers and non-profit organizations across Maui.

“Hard times tend to bring out the best and worst in people. Here’s a great example of the best,” said John Dobovan, President of the Haleakalā Chapter of the Hawai’i Farmers Union. “When our restaurants shut down last month a lot of people were suddenly out of work. Among the hardest hit were our local farmers, many of whom were deeply invested in crop production for a market that had disappeared literally overnight. With their cash tied up in a crop they had nowhere to sell, many farms faced catastrophe.”

It was not just farmers who faced economic peril. Local distributors also depend on restaurants for most of their sales. They employ numerous people, lease vehicles, rent warehouse space and buy packaging materials. Restaurants and their employees were suddenly out of work as well. A complex web of interconnected lives and businesses were suddenly disrupted.

“As these groups became aware of each other’s efforts they quickly decided to collaborate rather than compete,” said Dobovan. The Haleakalā Chapter of HFUU already had a food hub committee in place and took the lead, in collaboration with the Hāna, Lahaina and Mauna Kahalawai chapters.”

On March 21 the first group meeting was held via Zoom and the various entities began brainstorming how to approach the problem and to seek funding. Maui County, through the leadership of Mayor Victorino and the office of economic development, facilitated by a volunteer effort of former mayor Kimo Apana, quickly stepped up with a special grant to HFUU to purchase local food from farmers, and the Healy Foundation provided added capital for start-up operations.

The group researched, vetted, and purchased CSA software and built a website to host the first two Maui Hubs in Hāna and Kahului. Sales are now underway with drive-through pickups scheduled at both locations and several more customer pick up sites planned across Maui soon. Operations will be run in partnership with Sun Fresh, Local Harvest and Choice Health Bar, in hopes the Food Hub system can help keep them in business too.

“It is our intention that the Maui Food Hubs will become a permanent part of our community, serving as a conduit for fresh local food direct from farmer to consumer. We can offer delicious, nutritious food at a reasonable price and give our farmers much better support than they have previously received. We need to make family farming a viable enterprise for everybody’s sake in aggregating and distributing though a network of food hubs, sharing what we grow and raise locally throughout the island and state,” said Vincent Mina, State President of Hawaiʻi Farmers Union United.