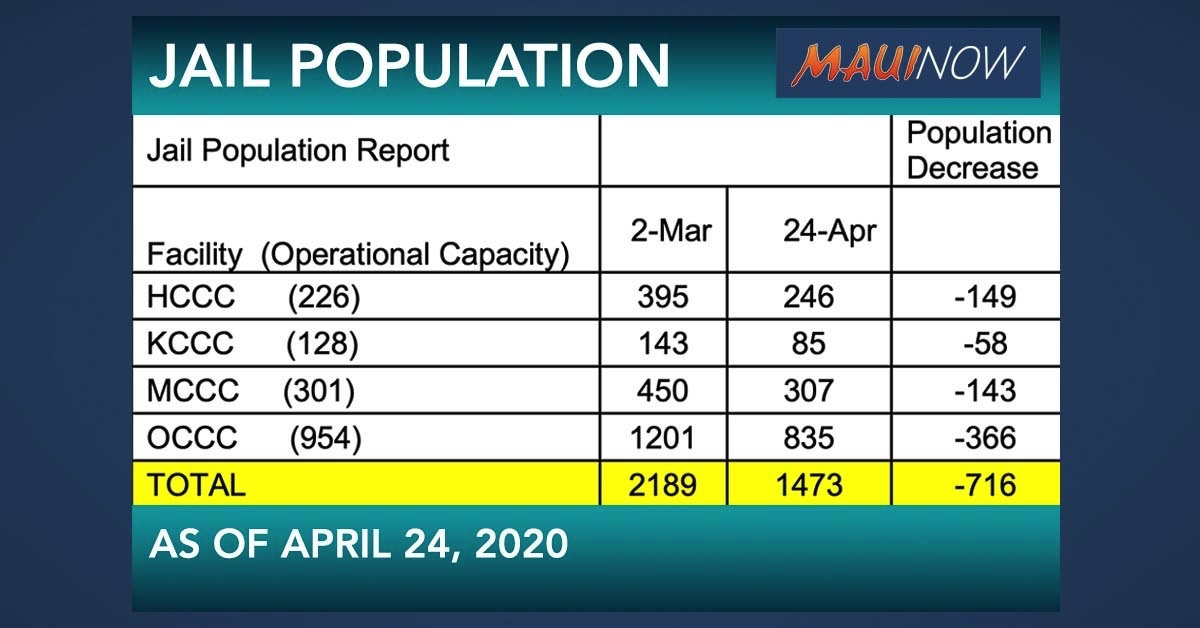 The inmate population at the Maui Community Correctional Center in Wailuku has dropped by 143 inmates to 307 over a 7-and-a-half week period from March 2 to April 24, 2020.  After dealing with overcrowding issues, MCCC is now getting close to its operational capacity of 301 inmates.

Overcrowding was named as a likely source of last year’s jail riot and nearly a year after the incident, on March 2, the jail was nearly 50% overcapacity with 450 inmates.  Today that number is just under 2% overcapacity.

Department officials say the decrease is “largely due to efforts made by the State Judiciary, county police departments and PSD’s Intake Service Division as they work together to limit the number of people requiring admittance into jails.”

The state saw a decrease of 716 individuals over the same period.

As of Friday, April 24, there were three inmates who were tested at the Maui Community Correctional Center in Wailuku, however all tests were returned negative for COVID-19.

Statewide, 15 individuals were tested as of Friday.  All reported negative results, with the exception of one inmate from the Kauaʻi Community Correctional Center who is still awaiting test results and has been place in medical isolation. 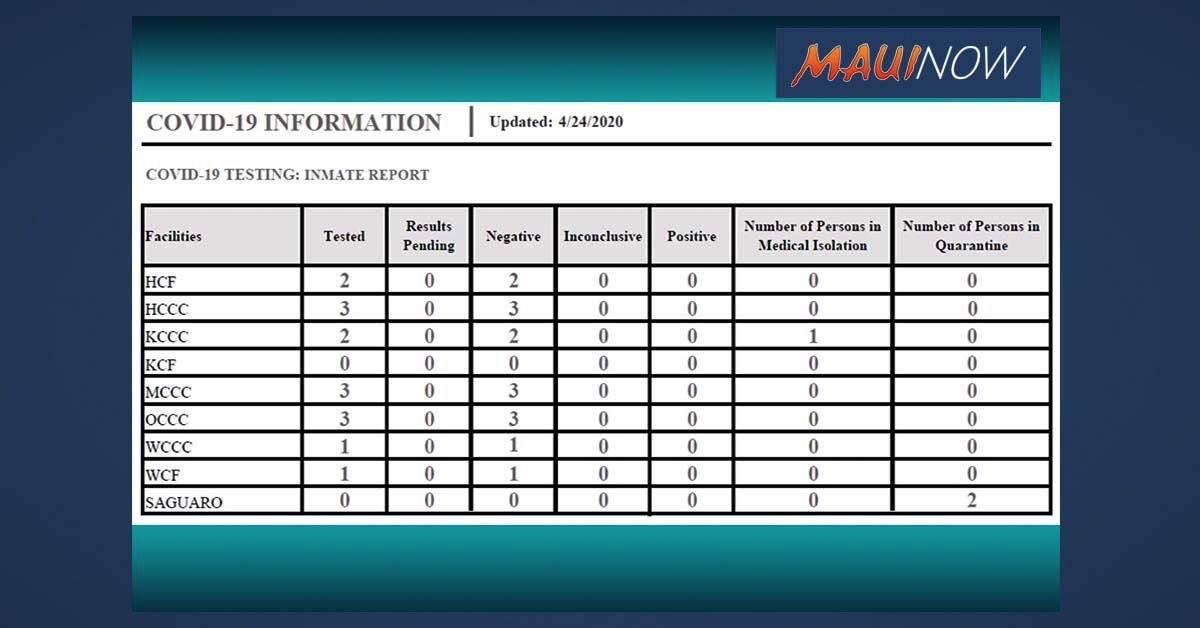 From May 4-8 the Hawai‘i Paroling Authority will resume regular hearings to determine minimum terms. Parole violation hearings will be held on May 6.

PSD Director Nolan Espinda said, “Prior to the COVID crisis HPA identified 88 individuals pending a parole date set by the HPA Board. To date, HPA has released 57 of those initial 88 cases with 31 cases pending verifications of residence and outside programming.”

He notes that there are also 71 new cases under review based on the considerations outlined in the Hawai‘i Supreme Court’s order.  So far, 27 of the 71 cases have established release dates within the next two weeks.

“HPA is also assessing community custody and minimum custody populations across the state, populations with pre-existing conditions as well as elderly inmates, as submitted by the Department of Public Safety to HPA for parole consideration,” according to Espinda’s update.

In an effort to keep the public informed, the Hawai‘i Paroling Authority has set up a COVID-19 virus public information access hotline at 1-808-253-1642.

The Department of Public Safety reports that it keeps a regular supply of personal protective equipment for normal circumstances, but department officials report that its supply has been depleting quickly.

To get ahead of the need, PSD submitted a large order for extra PPE which includes 14,000 cloth face coverings.  The order was received this week and PSD is in the process of distributing to correctional facilities across the state. 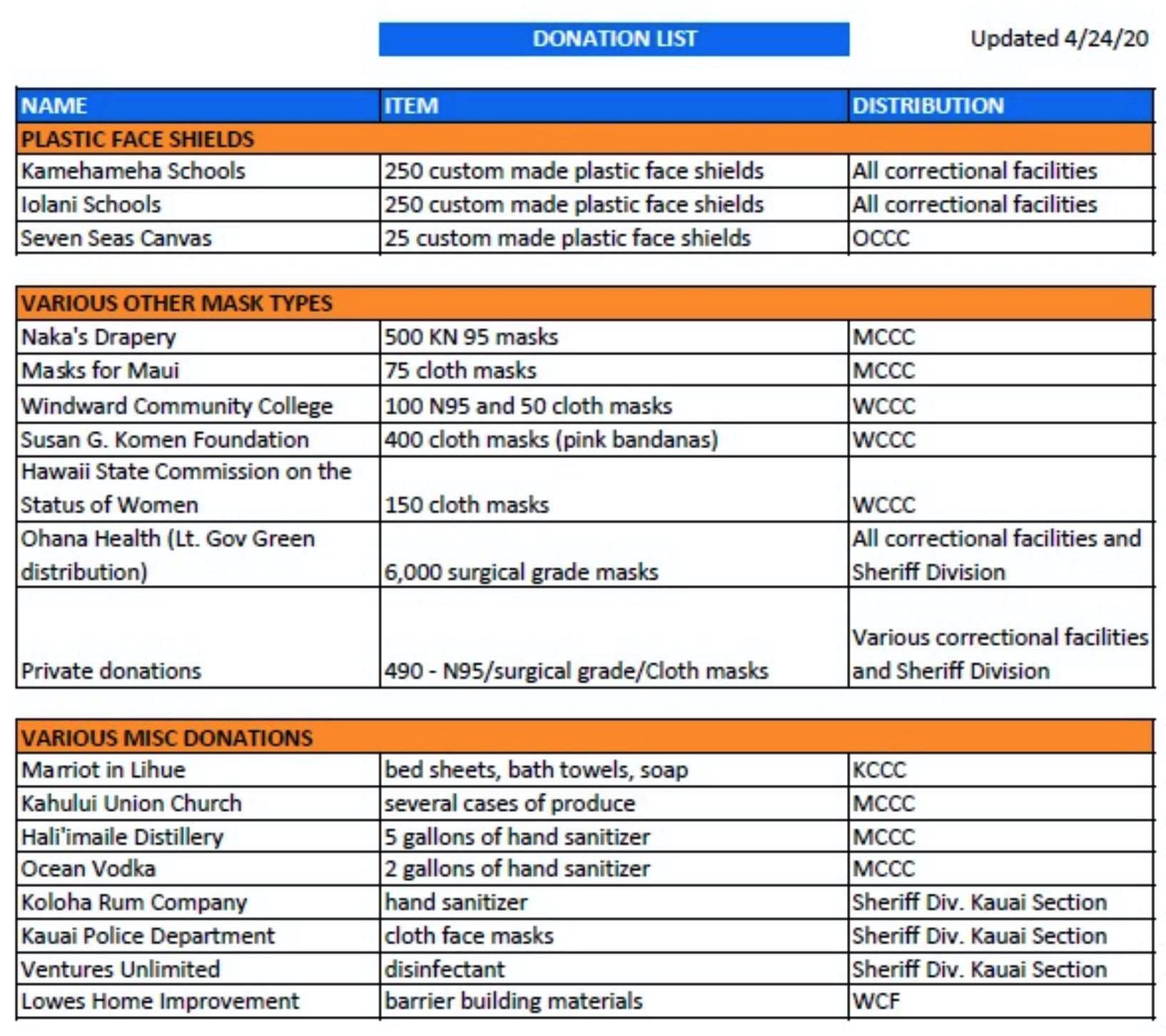