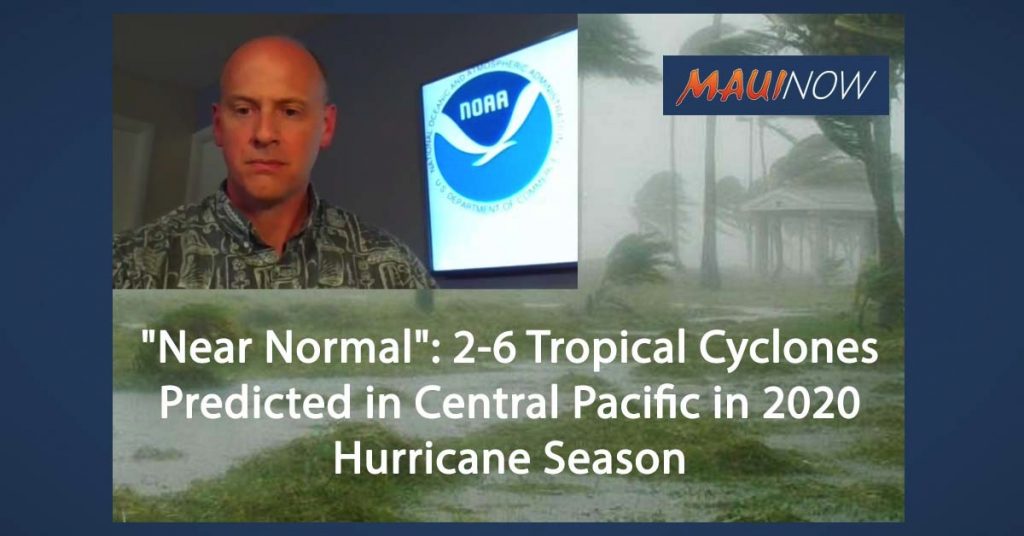 2020 Hurricane Season in the Central Pacific calls for a near-normal season with 2 to 6 tropical cyclones predicted.

The National Oceanic and Atmospheric Administration’s Central Pacific Hurricane Center is predicting a near normal 2020 hurricane season.  The outlook was announced during a press briefing held at 1:30 p.m. today.

The 2020 outlook indicates a 75% chance of having a near to below normal season. The outlook also calls for a 25% chance of above-normal tropical cyclone activity during the Central Pacific hurricane season this year.

For the season as a whole, 2 to 6 tropical cyclones are predicted for the Central Pacific Hurricane basin. This number includes tropical depressions, named storms and hurricanes.

Chris Brenchley, director of Director, NOAA National Weather Service – Central Pacific Hurricane Center said that is near the average of 4-5 per season.  Experts note that this does not specifically address or predict how many of these tropical cyclones will threaten directly the state of Hawaiʻi.

Brenchley said ENSO neutral (average) conditions are likely through August of 2020.  He said there is increasing uncertainty beyond August of having a La Nina developing after September, late in the season.

The hurricane season in Hawaiʻi runs from June 1 through November 30.

Agency officials urged the public to have an emergency plan in place now so that the community is ready for devastating impacts that a tropical cyclone could bring to the state of Hawaiʻi.

Maui Mayor Michael Victorino said virtual reality has become an important part of this pandemic and will become more important if a hurricane becomes a factor in the upcoming season.

Honolulu Mayor Kirk Caldwell said the state faces some unique challenges due to the current pandemic.  If a hurricane were to affect the Hawaiian Islands while response to the pandemic continues, government leaders will have to address the issue of people going to shelters and how they will do so with physical distancing in mind.

He said shelter space would need to be more spread out, and additional space would be needed to accommodate individuals and families seeking help.  Mayor Caldwell said he will be working with the Red Cross, on developing plans on how to screen people, how to handle those with temperatures and assess additional issues presented by the pandemic.

Maria Lutz, Regional Disaster Officer, American Red Cross of Hawaiʻi said shelters will include masks in their shelter kits. For those that will be seeking shelter, they will be asked to bring their own masks, but if they don’t have masks, they will be supplied by the shelter.

For personal preparedness kits, the public is advised to focus on water, and have a gallon per person per day. Those seeking shelter would be asked to bring items for sustenance and comfort including: shelf-stable meals or canned food with them, along with a can opener; make sure life saving medication is brought with them; and bring a blanket as these items are typically not provided.

Dennis Hwang, faculty with the University of Hawaiʻi Sea Grant, NOAA suggested that the public work on low cost items around the house to clear debris and do maintenance to prevent additional damage.

Hwang said almost every house in the state can be retrofitted at relatively low cost.  Around 2,500 homes in Hawaii have already been retrofitted with hurricane clips that help to keep the roof on during a major event.  He suggested that homes built on Maui before 1990 could stand to benefit from hurricane clips.

Hwang said the UH Sea Grant program will be hosting a Virtual Pau Hana Webinar on June 4 from 5 to 6 p.m. Advanced registration is required at: https://www.weventbrite.com/e/10519830696.

The wet season started with moderate drought over leeward portions of Oʻahu; and severe to extreme drought over parts of the Big Island and Maui County.

The wet season (from October to April) started and ended with ENSO-neutral conditions, according to Kodama.  He said the forecast had called for above average rainfall during the wet season.

At the end of April the wet season totals showed above average rainfall in many locations; however most of Maui County and portions of the Big Island ended up with below average rainfall.

According to Kodama, drought was reduced and eliminated in some parts of the state, but not completely removed in Leeward Maui and Leeward Kohala on the Big Island.

Kodama noted that for the May through September Dry Season, the probabilities are tilted toward below normal rainfall over the Hawaiian Islands during the 2020 dry/warm season.

The full media conference will be posted later today at: www.youtube.com/NWSHonolulu