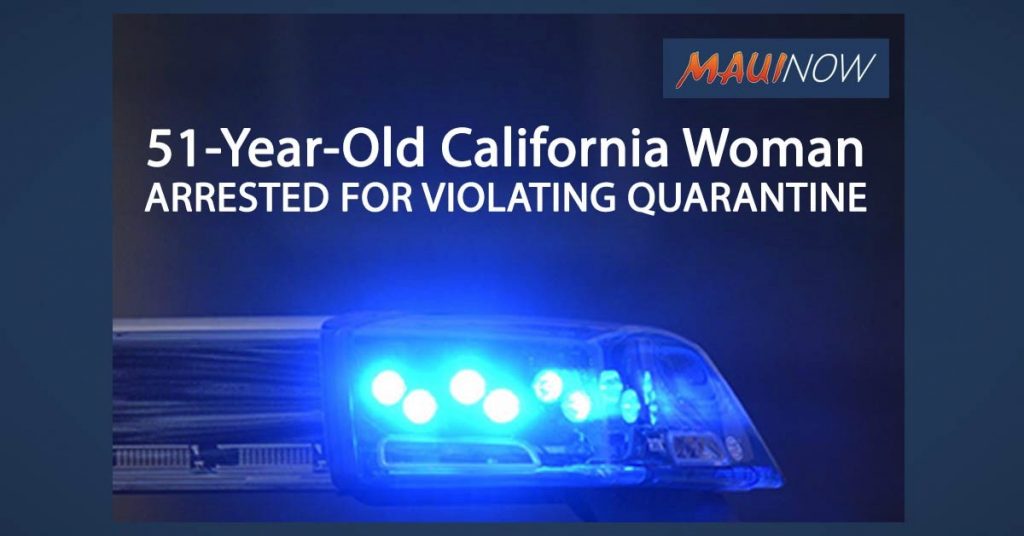 A 51-year old woman from Moorpark, CA was arrested this morning by a team of Special Agents from the Investigations Division of the Department of the Attorney General for allegedly violating the State’s 14-day travel quarantine.

Investigators say Misty Lynn Beutler arrived in Honolulu on May 9 to stay with her son at a Hawai‘i Kai condominium.

A resident of the complex reported seeing the woman and her son unloading luggage that day. Two days later, the same witness reported seeing the pair enter the condo lobby carrying beach equipment. Then on Wednesday, the witness said she saw Beutler walking her son’s dog.

This morning investigators went to the complex to interview witnesses. As they were doing so, they reportedly saw Beutler and her son come out of the elevator and attempt to walk out of the building. State officials say the woman was arrested, booked and charged. Her bail is set at $2,000.

Hawai‘i Attorney General Clare Connors said, “We again ask all visitors and returning residents to follow both the 14-day quarantine rule and all emergency rules in place right now. In addition to my office, law enforcement agencies across the State have cited hundreds of people for emergency rules violations and have made dozens of arrests for violating the travel quarantine. We appreciate everyone’s cooperation in these efforts.”

The 14-day quarantine for out-of-state arrivals remains in effect through June 30 and is being reevaluated on a monthly basis.

The 14-day interisland quarantine for travel between islands is under review.  In an Instagram video message on May 22, Lt. Gov. Josh Green said to prepare for June 1, 2020.  “What I mean by that is we should be able to do interisland travel.  We’re getting the forms straightened out without quarantines.  So I’m hopeful that that will happen.”