Gabbard Speaks Out Against Surveillance Bill 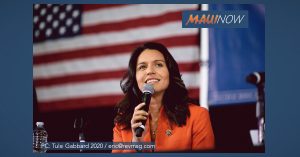 Through legislative actions, Rep. Tulsi Gabbard (HI-02) opposed efforts to advance H.R.6172, the USA FREEDOM Reauthorization Act of 2020. Earlier this week, Rep. Gabbard submitted two amendments and argued that strong protections against the warrantless collection of Americans’ Internet browsing history must be added to H.R.6172 in order to ensure warrantless surveillance and collection of data on American citizens would be prohibited.

However, House leadership did not allow any amendments to H.R.6172. Ultimately, a vote on the bill was cancelled due to lack of bipartisan support.

Having failed to pass H.R.6172, House leaders voted to send the bill to a conference committee of House and Senate members to negotiate changes to the final bill. However, Rep. Gabbard voted against this because it took away the House of Representatives ability to enact necessary changes, and because it stripped an amendment that strengthened religious freedom and free speech rights.

“It is the responsibility of our nation’s leaders to strike a balance between keeping the American people safe and ensuring our constitutional rights and freedoms are upheld. This bill failed to meet that standard by continuing to allow for surveillance or collection of information on American citizens without a warrant, therefore violating our 4th Amendment rights,” Gabbard said in a press release.

“The American people deserve the peace of mind in knowing that our government will keep them safe and respect their civil liberties and privacy in doing so.”

Rep. Gabbard introduced an amendment that would strengthen the Privacy and Civil Liberties Oversight Board (PCLOB) to expand its mandate to oversee all foreign intelligence activities and allow it to issue subpoenas to compel testimony or produce documents without the prior approval of the U.S. Attorney General. She has continually fought for this since her first term in Congress when she introduced H.R.5595, the Strengthening Privacy, Oversight, and Transparency Act (SPOT) Act.

She also introduced an amendment that would prohibit the use of FISA authorities against any U.S. Citizen and lawful, permanent resident without a warrant from a traditional Federal Court and it blocks any evidence obtained under FISA authorities in subsequent proceedings against them if such a warrant was not obtained. A similar amendment was offered by Sen. Rand Paul (KY) during the U.S. Senate consideration of the bill earlier this month.