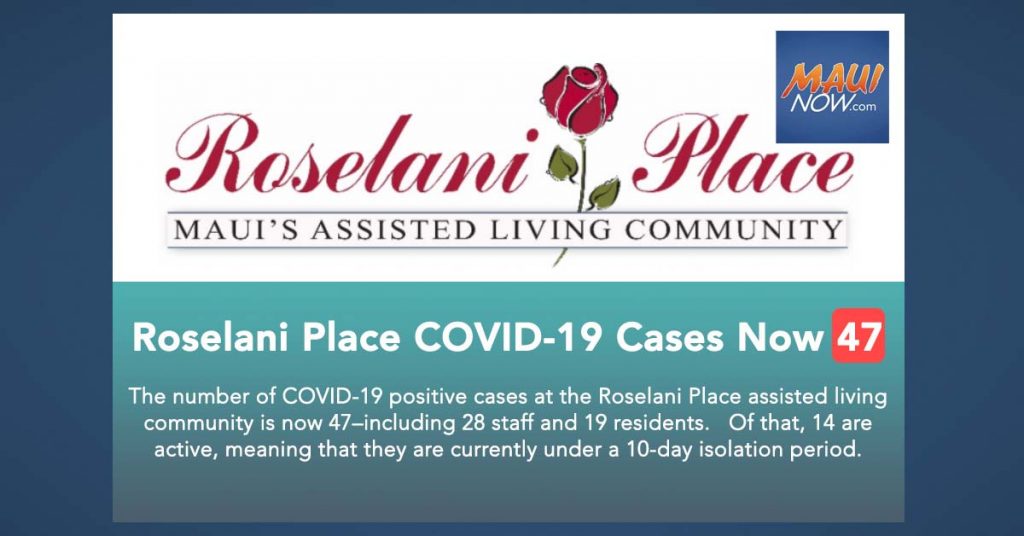 The number of COVID-19 positive cases at the Roselani Place assisted living community is now 47–including 28 staff and 19 residents.

“It is important to note that of the total 47 cases, only 14 are active, meaning that they are currently under the 10-day isolation period,” said Karl Drucks with Paradigm Senior Living, the management company for Roselani Place Senior Living.  The active cases include eight staff members and six residents.

According to Drucks, only one current resident has tested positive a second time, and that individual was the original positive case identified at the facility.  He continued saying he has confidence that efforts are helping to improve the situation.

The first case at the facility involved an elder who resides in the memory support portion of the facility. The individual had moved into the facility on Aug. 15 from the hospital, according to an earlier press release issued by Roselani Place.

“It’s our continued goal to minimize the number of residents, staff, families and visitors in the community to help mitigate the spread to others,” said Drucks.

“Maui Health Department recommends that any person who develops fever or respiratory symptoms (e.g., cough, shortness of breath) should stay home away from other people and seek health advice by phone from a healthcare provider. We appreciate everyone’s continued support, and that we recognize the heroes among us who work to provide excellent care to our kupuna,” he said.