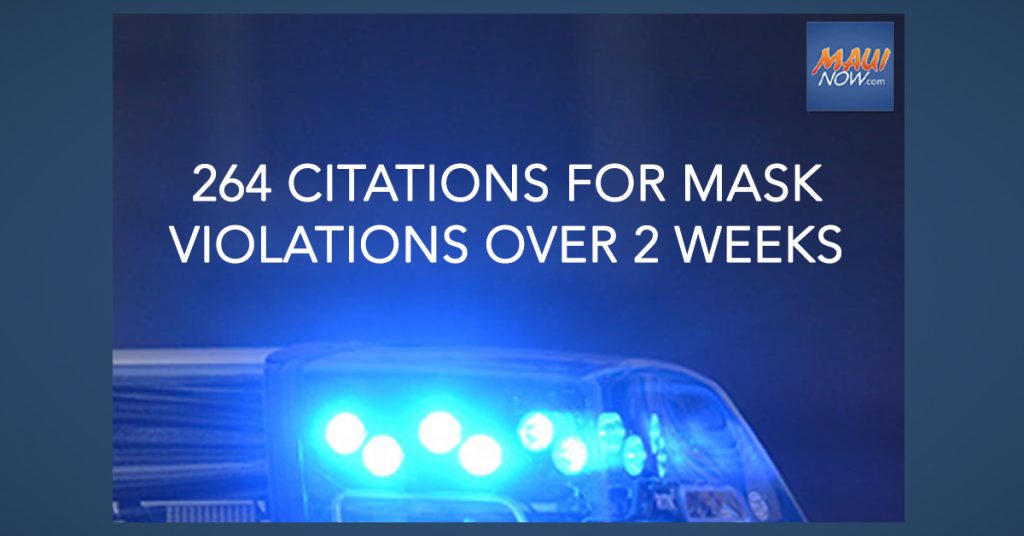 Maui Police issued 264 citations for face mask violations over a two week period between Oct. 30 and Nov. 12.  County officials say 209 were issued to residents and 55 were to visitors.

Off duty police officers have been working on a task force specifically aimed at face mask enforcement.

County officials say Governor David Ige will be issuing a statewide proclamation in the next day or two to make things consistent.  The unified mask wearing police will be for the entire state, according to Maui Mayor Michael Victorino.

For the week ending Nov. 7, Maui County has had an 85 percent mask wearing compliance rate.  Baz said 6 percent were wearing their mask incorrectly and 9 percent had no mask at all.  “Really, we’re doing better at wearing masks,” said Baz, noting that the goal is to get to 100 percent compliance.

Officials with the Maui District Health Office discouraged visiting elderly relatives, but said that if people chose to do so, to visit kupuna first before going elsewhere to reduce the risk of spreading illness from other contacts.

For the period from March 30 to Nov. 9, Maui Police have made 142 arrests for violations of rules and orders.  Approximately 45 of those arrests have been for quarantine violations.