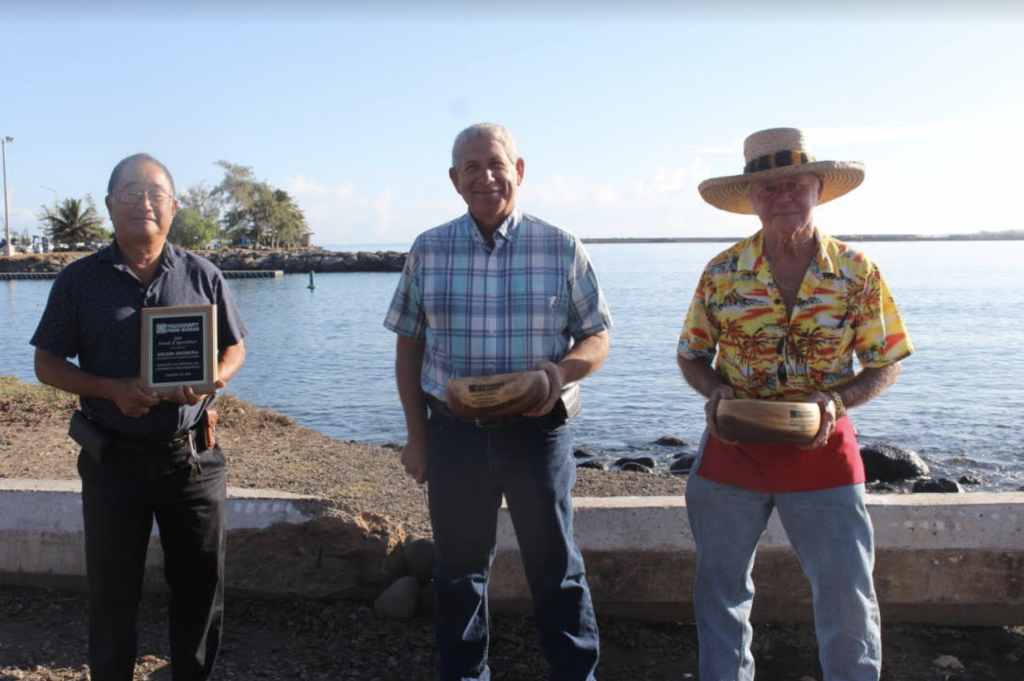 “Our members believe in the essential and inherent value of farming, and they understand how agriculture enriches our community,” said MCFB Executive Director Warren K. Watanabe. “These awards are important because they recognize our farm families and their efforts to further and strengthen a healthy and viable agricultural industry in Maui County.”

When Maui Cattle Company, LLC was founded 18 years ago, Alex Franco was named president and general manager, and he has held that position until his retirement on June 30, 2020.

Back in 2002, six independent family-owned ranches spanning over 60,000 acres of prime grazing land came together to found MCC. With Alex at the helm, their vision remains clear to this day: to reinvigorate an agricultural lifestyle through the establishment of a sustainable ranching industry. The group knew they could achieve this vision if they kept their livestock on island and if they delivered a premium product to local businesses and consumers.

Known by everyone as a humble, smart, hardworking and honest person, Alex is the kind of guy you want on your side when the going gets tough. He doesn’t give up! In his decades working in the livestock industry, he’s proven his commitment to raising cattle in the islands, and he knows firsthand the work required to bring a quality product to market.

Alex was instrumental in realizing MCC’s vision to provide 100% grass-fed, all-natural beef raised on Maui to restaurants, hotels and consumers. He helped secure a contract in the food service industry to get local beef in the Federal School Lunch Program on Maui. Working closely with Elli Funakoshi, now MCC’s operations manager, he created a value-added beef jerky product and a new custom vacuum-sealed packaging. In 2019, he helped open a new USDA certified slaughterhouse, giving MCC more flexibility on the amount of cattle to slaughter.

Alex has always worked hard to represent Maui’s livestock industry on a statewide level and by serving on the Maui County Farm Bureau board of directors. Throughout multiple droughts and recessions, 9/11, hurricanes, and other natural disasters, Alex has been a steady hand for Maui’s livestock industry, supporting MCFB’s programs along the way and leaving an impressive legacy at Maui Cattle Company.

Maui is rooted in family-owned businesses, and a Maui favorite is the Okumura family’s VIP Foodservice and Island Grocery. President Nelson Okumura is a second-generation family owner.

Nelson’s support during Covid-19 reminded MCFB that the Okumura family have always been staunch supporters of Maui agriculture. Nelson’s father Roy Okumura established the company in 1951 with the motto: “We are proud to be a local company, serving our island home of Maui.” From the beginning, they worked one-on-one with Maui farmers and ranchers to sell their products to business and consumers.

In 1963, the company expanded beyond produce and became a broadline foodservice distributor. Today, between the two businesses, 150 team members serve Maui businesses via its VIP Foodservice division and consumers via its Island Grocery Depot Stores in Kahului and Lahaina. VIP Foodservice serves a diverse base of over 760 operators, including resorts, restaurants, grocery stores, healthcare and schools. The service helps businesses become more cost efficient, connecting them with the ingredients they need so they can focus fully on customer satisfaction. VIP works both with farmers and ranchers to offer local produce and proteins, and with other suppliers to provide trusted national brands.

​From the opening of the first store in 1985 until 2014, everyone knew VIP’s grocery division as VIP Cash N’ Carry. In 2014, the store name was updated to Island Grocery Depot. Today, the two stores in Kahului and Lahaina provide hard-to-find local specialties and Maui’s favorite nationally branded products, in both individual and bulk sizes.

The Okumura family have always been unwavering supporters of MCFB. When the Covid-19 crisis hit in March, Nelson stepped up to orchestrate the huge task of moving perishable food from Maui’s farms to the general public pick-up points. Without hesitation, he provided chilled food storage and distributed Grown on Maui produce to the community.

“Without Nelson’s support, MCFB and the County of Maui would not have been able to service the needs of our community in an efficient and organized way,” Rasmussen says. “Over the years, Nelson has always been there ready to help, whether it’s donations for an ag program or a place to host a meeting. He doesn’t seek recognition or ask for anything in return. He merely steps forward and helps get the job done!”

All it took was one field of carnations in Upcountry Maui, and Captain W.C. Goble USMC (retired) was hooked. That was more than 30 years ago, and Woody Goble has been cultivating, producing, arranging and shipping tropical flowers ever since.

Born and raised in New Jersey, Goble graduated from Citadel in South Carolina in 1966 and flew CH46 helicopters in the Vietnam War. In 1970, he met his wife Carmen, who was from Maui but was working as a bank teller at Kaneʻohe Marine Corps. After visiting an acquaintance’s carnation flower farm on Maui with Carmen, Woody knew he wanted to move to Maui and start his own flower farm.

He and Carmen began by growing carnations, baby’s breath and mums on leased land in Upper Kula. In a second wave of flowers, they grew bird of paradise, eucalyptus and protea. Today, the Gobles own eight beautiful acres on Thompson Road. Woody creates his signature flower bouquets by adding flowers from Hawai‘i Island—like anthurium, heliconia and pink and red ginger to his magnificent Maui-grown flowers.

The Gobles have four grown children—Roberta, Gavin, Morgana and Chip—who live on the mainland and visit often; and eight grandchildren. Woody knows farming can be a tough business, but he still hopes one of his children will carry on the farm operation.

What does Woody love most about being in the flower-growing business? “Selling flowers to people and watching them smile,” he says.

When Dave Chun examines ways to help food producers on Maui and statewide, his approach is primarily to view industry stakeholders as businesspeople who happen to be engaged in the livestock, fruit, vegetable, seafood, flower, value-added production, retail/wholesale, and/or supply chain industries.

“It is my belief that the food production system is a key third economic leg to tourism and military,” Dave says. “The system must be resilient enough to withstand global calamities, pandemics, economic recessions, and other storms yet to happen.”

As legislative director for Congresswoman Tulsi Gabbard, Dave advocates tirelessly to increase this resiliency for the islands’ agricultural industry. Key projects have included heading up a biocontrol project working group to address the coffee berry borer, as well as creating legislation to address damages in the islands caused by the two-lined spittlebug. In light of the Covid-19 economic disruption, Dave crafted a letter to House leadership and appropriators urging support for Hawai‘i food producers.

Dave was last year’s recipient of the Ka Lei Hano Heritage Award. This award is the highest tribute given by the University of Hawai‘i College of Tropical Agriculture and Human Resources (CTAHR) to those who have enhanced the College’s efforts to support a diverse economy, healthy environment, and strong communities.

On Maui, the MCFB Mike Lyons Award exemplifies the dedication to community for which the late Mike Lyons was known. A vice president for Bank of Hawai‘i, Mike helped many nonprofits on the Valley Isle during his 40-plus years of service. He was a founder of MEDB and served as a community leader and volunteer board member for numerous groups.

“We are pleased to recognize Dave Chun as the Mike Lyons awardee,” Rasmussen says. “Dave carries out his commitment to community in the work he does on behalf of farmers every day.”

Although Dave doesn’t have many spare moments in his busy schedule, his favorite pastimes include hanging out with the lambs and kids at his Maryland farm and watching Youtube clips on the history and cultivation of crops. Agriculture is never far from his mind.