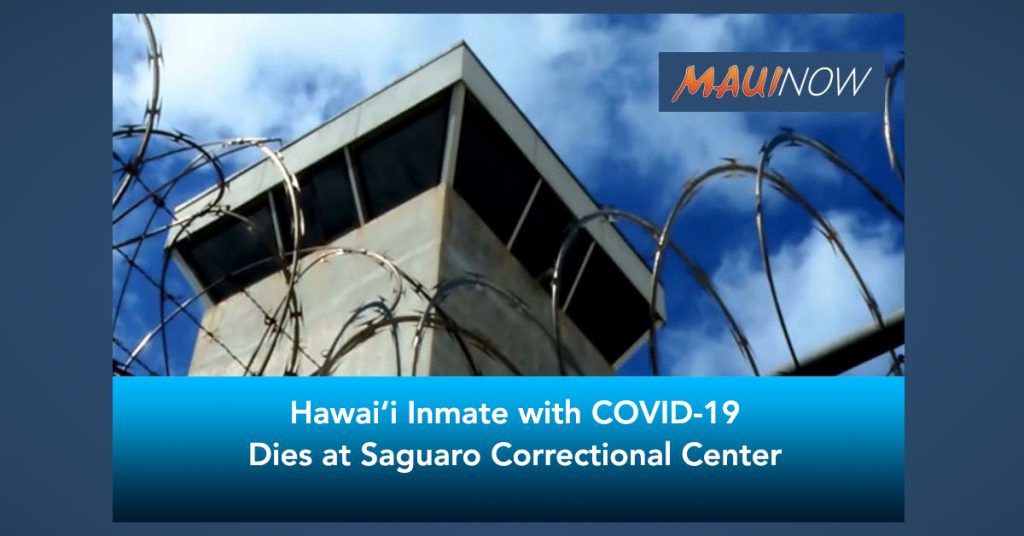 A male Saguaro Correctional Center inmate from Hawaiʻi, who was 60-69 years old with underlying medical conditions, died on Tuesday at an Arizona hospital.  He was admitted on October 19 for treatment of a medical condition. This is the first death of a Hawai‘i inmate identified in medical examiner’s reports as a COVID-19-related death. No additional information is being provided to protect individual medical privacy.

“We have been in contact with his family and let them know that our heartfelt condolences and thoughts are with them during this difficult time,” said Tommy Johnson, deputy director for Corrections. “We will be bringing him home to Hawai‘i for his family.”

Mass testing of all Hawai‘i inmates at the Saguaro Correctional Center in Eloy, AZ was completed on Thursday, Oct. 29. The 662 inmates with first-round negative test results are undergoing re-testing as part of surge testing efforts at the facility. The current test results of the entire Hawai‘i inmate population at Saguaro are broken down as follows: 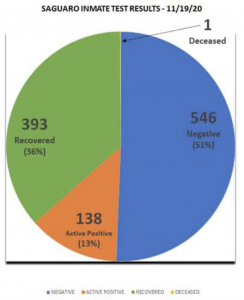 Note: 131 out of the 138 active positive cases will mark their 14th day of medical isolation tomorrow and are expected to be cleared from quarantine. That will leave three positive inmates in medical isolation and four inmates in the hospital. The negative inmates remain in a precautionary quarantine. There are currently 1,079 inmates housed at Saguaro.

“We take the health and safety of all those who are in our contracted prison, as well as those who live and work in our state facilities, very seriously. That is why PSD is conducting surge testing at all facilities statewide and asked Saguaro to do the same,” said Fred Hyun, acting PSD Director.

On top of the monitoring and testing, the Saguaro staff assured PSD that the facility will continue to implement stringent sanitation and hygiene measures to limit potential exposure and mitigate the spread of coronavirus to inmates and staff.

Meantime, the Waiawa Correctional Facility on Oʻahu has confirmed eight (8) inmates tested positive for COVID-19. The confirmed positive results were received on Wednesday morning. There are two other inmates also in medical isolation with pending test results and 130 inmates have been placed under quarantine as a precaution. DOH is conducting contact tracing.