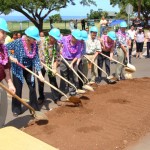 Phase 1A along Ikena Ave. is projected to provide traffic relief for the Lahainaluna Road corridor which presently serves three major public schools and residential subdivisions in Kahua Tract and Kelawea Mauka. Photo by Wendy Osher. 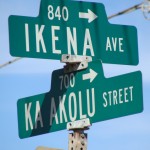 A two-lane bridge is proposed to cross over Kahoma Stream and an overpass will be added to allow the new highway to flow beneath the existing Lahainaluna Road profile. Photo by Wendy Osher. 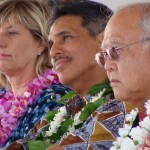 “It’s only a half a mile stretch of total project length but it’s going to be about $50 million. We’re going to be building a major bridge across Kahoma as well as making an overpass for Lahainaluna Road,” said Morioka. 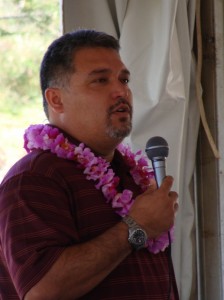 “Phase 1A, coupled with the widening of Honoapi’ilani Highway, will bring much needed congestion relief to the community immediately. The completed bypass will provide the capacity to service West Maui well into the future,” he added. 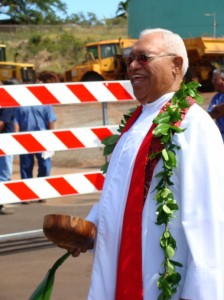 The project is aimed at alleviating traffic and improving circulation in Lahaina town. Lt. Governor Duke Aiona listed a number of benefits he projects for the area.

“The numbers are pretty simple. In the last five years, the population on Maui has increased about 5%, but car registrations have increased by about 14%. So obviously, you’ve got more people on the road, and this is not something that is new, it’s something that has been accumulating over the last 20 years since this project went into the planning phase,” said Aiona.

“For one it will relieve traffic, it will help the economy (people will have more jobs), it will also help the economy with regards to transportation of goods and services to Lahaina, and quality of life in general,” said Aiona.

Today’s groundbreaking is for the first of several phases that will ultimately result in a 4-lane bypass highway spanning approximately 9 miles from Launiupoko to Honokowai.

Crews began preparing a detour route in December to allow the partial closure of Ikena Avenue between Lahainaluna Road and Kaakolu Street. The closure was required for mass excavation in Ikena Avenue and construction of the Lahainaluna Grade Separation structure.

The Federal Highways Administration provided 80 percent matching funds on this $50 million design-build contract. Hawaiian Dredging Construction Company, Inc was selected for this phase of the project. 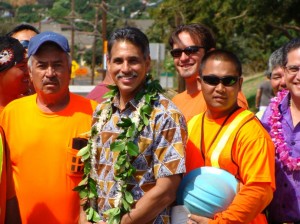 Lt. Governor James R. "Duke" Aiona said that while population on Maui has increased about 5% in five years, car registrations increased about 14%. With more cars on the road, Aiona said, this project will help to alleviate traffic congestion in West Maui. Photo by Wendy Osher. 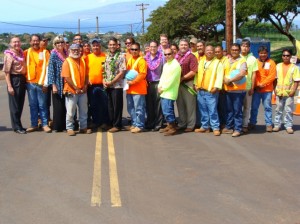 With the completion of this project, an alternate route down to the highway will be provided through the Keawe Street Extension to alleviate congestion at the Lahainaluna Road and Honoapiilani Highway signalized intersection. Photo by Wendy Osher.

Phase 1A is expected to be completed in the Fall of 2011.

Further information can be found at the following links: