The Maui Police Commission accepted public testimony today (Wednesday, April 15, 2009) from those speaking on behalf of applicants for the Chief of Police. 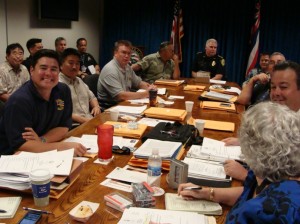 Maui Police Chief Tom Phillips provides a department update to commission members. The commission also heard testimony on applicants for Chief of Police. A new chief is expected to be selected next month, prior to the retirement of Phillips in June. Photo by Wendy OSHER 2009.

The discussion was the first of two scheduled meetings to be held over the next three weeks.  Testimony will also be accepted at a May 6th meeting set for 10 a.m. at the HGEA Conference room at the David Trask Building in Wailuku.

The deadline to apply for the job passed on Monday (April 13, 2009).  The post is being vacated by the departure of Police Chief Tom Phillips who retires on June 1st after 33 years with the department.

During today’s meeting, Chief Phillips discussed the budget constraints that he anticipates in the upcoming fiscal year.

“Right now we’re not planning any cuts.  We’re hoping to get by on what we have,” said Phillips.  If cuts are necessary, the first area to suffer would be prevention.  Although effects are hard to measure, Phillips said, the cumulative effect would be “huge over time.”

The visitor oriented policing division is already operating at 50% and there are positions that are going unfilled in other programs, including vacancies for school resource officers.

Investigation Continues into I.D. of Skeletal Remains: Maui Police continue their investigation of March 17th discovery of human skeletal remains found near Kahului Beach Road. Wailuku Patrol officers were responding to a motor vehicle accident early that morning, when they came upon the remains in shrubbery about 20 yards south of the accident scene.  Authorities say the body has yet to be positively identified, but clothing, jewelry and personal effects found at the scene are indicative that the body was that of a female.  An initial forensic scene investigation had indicated that the unidentified skeletal remains were at least five years old.

There were a total of seven fatal traffic accidents on Maui County roads so far this year compared to 5 at the same time last year.  In the month of March alone, there were 4 traffic fatalities, two of them involving motorcyclists.

The Maui Police Department issued Officer of the Month (for March) and Officer of the Quarter (for the first quarter of the year) awards for outstanding service in six districts in Maui County.  Officers were recognized for work that ranged from undercover drug stings to assault investigations in Waiuku, Lanai, Hana, Lahaina, Molokai and Kihei.