University of Hawaii football coach Greg McMackin will be suspended for 30 days and take a salary cut as part of the actions handed down by the University of Hawaii administration today.Â  The actions come after McMackin used a gay slur in a WAC media briefing yesterday to describe a dance performed by the Notre Dame football team before a banquet for the Sheraton Hawaii Bowl last year.Â  The comments sparked widespread attention and prompted a written apology from McMackin and school officials yesterday. 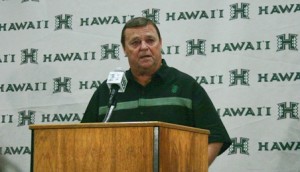 McMackin addressed the community in a short, but choked up apology at a press conference this afternoon at the Stan Sherrif Center saying, “I made a big mistake.Â  I want to apologize to everyone and anyone that I offended with my remarks.Â  I am committed to do whatever I can to use this as a life lesson to learn from my mistake.”

McMackin has agreed to volunteer his time while under suspension without pay, to continue coaching the Warrior team. Â Â Part of the money from his salary reduction will be used to support a student intern from the LGBT support group on campus to assist in awareness training. McMackin will also be tasked with participating in a public service announcement describing how words can hurt.

University of Hawai’i at Manoa Chancellor Virginia S. Hinshaw said, “This has been a painful experience for all involved, but we must now consider actions that will help everyone learn from this very negative event and improve for the future.”

University actions include the following:

“I am entirely devoted to providing every opportunity for Coach McMackin and the Department of Athletics to serve as advocates for change in support of LGBT people in Hawai’I,” said Camaron Miyamoto, Coordinator for the University’s Lesbian, Gay, Bisexual, Transgender Student Services.

“It is my hope that our combined resources and efforts will build a more respectful and inclusive campus,” said Miyamoto.

“In my own interactions with Coach McMackin, he has always been respectful in dealing with all people and set an excellent example for our student-athletes,” said Hinshaw.Â  “Yet he still made a serious mistake and we all know that words carry painful consequences so we are all striving to deal with the damage that was done,” said Hinshaw.