Hurricane Felicia has maintained her strength as a category 4 hurricane with winds remaining near 140 mph.Â  At around 5 a.m., the system was located at 1545 miles east of Hilo Hawaii and moving at a rate of 10 mph. 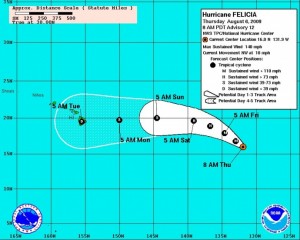 The current track brings the storm within reach of the Hawaiian Islands, but slow weakening is forecast during the next couple of days as Felicia moves over cooler waters.Â  Hawaii could begin to see impacts of the system over the weekend in the form of heightened surf, and increased gusty winds and locally heavy rains around Monday if Felicia remains on her current track toward the islands.

Forecasters from the National Weather Service and the National Hurricane Center say that while Felicia is maintaining strength, it is expected to begin a weakening pattern later today.

FELICIA DISCUSSION:Â  (Provided by Forecaster BLAKE with the NWS and National Hurricane Center)

Cloud tops have recently cooled in the eye-wall of Felicia during the past few hours…though the eye temperature has also cooled at the same time.Â  Overall…the changes have been pretty small with the hurricane maintaining a well-defined eye and a symmetrical outflow pattern.Â  Dvorak satellite intensity estimates are mostly unchanged and support keeping the initial intensity at 120 KT for this advisory.

Some weakening of the hurricane is likely to occur soon as the cyclone moves over progressively cooler waters.Â  However…Felicia is demonstrating some annular hurricane characteristics…and wind shear is expected to be rather low for the next couple of days…

Which could enable the system to maintain its intensity more than it normally would over marginal SSTS.Â  For these reasons…the official forecast is kept on the higher side of the guidance during the first 36 hours.Â  Although SSTS rise slightly as the hurricane moves into the central pacific…westerly shear is expected to become moderate to strong…which should continue the weakening process. In fact…almost all of the guidance suggests that Felicia will be a tropical depression…or dissipated…by the end of the forecast.

The estimated movement during the past twelve hours is 305/9.Â  This general motion is expected for the next day or so as the hurricane moves toward a weakness in the subtropical ridge.Â  In a couple of days…ridging currently north of Hawaii is expected to shift eastward and cause a westward turn of Felicia.Â  Aside from the NOGAPS model…which has a strange initial interaction between Felicia and Enrique…the global models are in good agreement on this forecast scenario.Â  In the longer-range…Felicia is expected to be steered a little south of due west as it becomes a shallower system and more influenced by the low-level trades.Â  The official forecast is very close to the previous NHC forecast and the dynamical model consensus.