Felicia continues on a path towards the Hawaiian Islands.

Felicia is moving to the west at near 14 mph, and this motion is expected to continue for the next couple of days.Â  The center of Felicia is expected to be near or over the Hawaiian Islands by late Monday or early Tuesday.

Maximum sustained winds are near 50 mph, with higher gusts.Â  Gradual weakening is foecast during the next couple of days.Â  Felicia could still reach the Hawaiian Islands as either a tropical depression or tropical storm.

Tropical storm force winds extend outward up to 115 miles from the center.

The air reconnaissance measured a minimum central pressure of 1003 mb or 29.62 inches.

Even though Felisia is still east of the Hawaiian Islands, a building swell generated by the tropical cyclone has already reached the East facing shores of the Big Island.Â  This large swell will begin to impact the remaining Hawaiian Islands tonight and tomorrow. 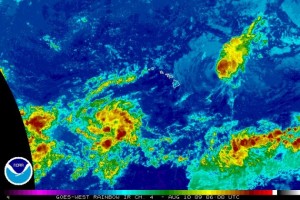 Regardless of the strength of Felicia when it reaches the Hawaiian Islands, heavy rains are still expected to occur and flash flooding remains a possibility.
The next advisory will be issued by the Central Pacific Hurricane Center at 11 p.m. HST 8/9/09.