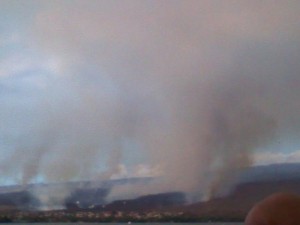 A change in wind conditions has caused the brush fire on Molokai to switch from a mauka direction to makai. In response, Maui Police ordered residents in the Kalamaula Mauka area to evacuate at around 4:15 this (Sunday, August 30, 2009) afternoon. Police officers conducted door-to-door notifications to the approximately 25 residents in the area. Red Cross will be operating an emergency shelter at the Mitchell Pauole Community Center in Kaunakakai for displaced residents.

The brush fire burned 6,000 acres by afternoon. More than 30 firefighters worked overnight to battle 17 different extensions of the fire.Â  Overnight, a single residence sustained damage to its garage.Â  Today crews were assisted by staffing from Makawao and Kihei as well as 23 wildland firefighters from the state Department of Forestry and Wildlife. The fire was first reported at around noon on Saturday. The cause is unknown at this time.

Earlier updates are posted below.

(Posted by Wendy Osher, Information provided by the County of Maui.) 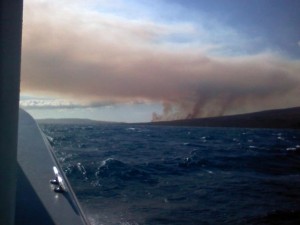 The brush fire that was first reported at 12:05 pm Saturday afternoon has now burned an estimated 6,000 acres and has shifted back to burning in the mauka direction. Firefighters are currently concentrating on the eastern flank of the fire after earlier efforts by firefighters and helicopters to curtail the western section of the fire caused some tapering at the western flank. No other significant changes have occurred. See story below issued earlier today for additional information.

(Posted by Wendy Osher, Information provided by the County of Maui)

A brush fire on Molokai had burned 5,000 acres by Sunday morning and had damaged the garage of a single home.Â  County officials say the shifting wind had initially pushed the fire in the mauka direction, but had changed and moved toward Kaunakakai town today, coming as close as across the street from Hotel Molokai. 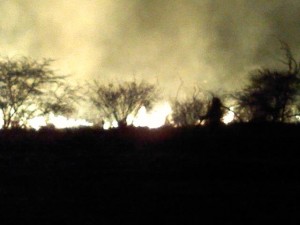 County Communications Director Mahina Martin said one residence sustained damage to its garage, and at approximately 2:00 am voluntary evacuations were advised. The brush fire approached a residential area of approximately 100 homes as the wind direction shifted throughout the night and early morning hours.Â  Over 30 firefighters were on scene throughout the night battling over 17 different finger extensions of the brush fire.

At sunlight, four helicopters returned to conduct water drops after ceasing at nightfall Saturday due to safety precautions. Helicopter water drops forced the closure of Cooke Memorial Pool, which is being used as water source.

Molokai residents are reminded to stay out of the fire area for their own safety and also to assure water tankers and heavy equipment can operate in the confined area.Â  The fire was first reported shortly after noon on Saturday, August 29, 2009.

One firefighter was treated for smoke inhalation at Molokai General Hospital yesterday and remains in stable condition. No other injuries are reported.

5 bulldozers, 2 loaders, and 3 water tankers are on scene from the County’s Department of Public Works, State agencies and private companies.

Fire officials report that no homes are in immediate danger at this time. The cause of the fire is unknown.
(Updated:Â  10 a.m. Sunday, August 30, 2009; Information provided by the County of Maui)