Hawaiian Airlines will offer daily service between San Diego and Maui for the first time since summer 2008.Â  It is one of two daily nonstop flights being added to Maui in June. Â The other is an Oakland to Maui flight. 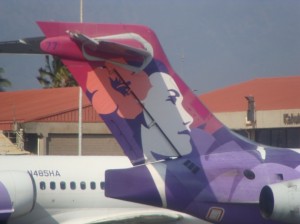 Hawaiian Airlines to add two seasonal flights between Maui and California for the summer. File photo by Wendy Osher.

The flights are part of the company’s efforts to expand its service from Hawaii’s largest visitor markets for the summer peak travel season.Â  A third Hawaii/California flight starts in June between Los Angeles and Honolulu, utilizing the company’s first two new Airbus A330-200 aircraft.

Mark Dunkerley, Hawaiian’s president and CEO, said, “The arrival of the first of our new longrange Airbus aircraft gives us the opportunity to expand our service from Hawaii’s largest visitor market when travel demand is at its highest.”

Hawaiian will supplement its daily Los Angeles-Honolulu service with a new flight using the wide-body, twin-aisle A330-200 aircraft, which seats 294 passengers – 30 more seats than the Boeing 767-300 – in a two-class configuration. Flight #3 will depart Los Angeles daily at 10:45 a.m. and arrive in Honolulu at 1:15 p.m. Return Flight #4 will depart Honolulu daily at 10:30 p.m. and arrive in Los Angeles the following morning at 6:55 a.m. The extra flight runs through September 6, 2010.

Tickets for the three new summer flights are now available for purchase.