The state Department of Transportation’s Highways and Airports Divisions will be partnering with Mothers Against Drunk Driving (MADD) on a safety awareness campaign called “Tie One On For Safety.”Â  All state vehicles from these divisions will display a red ribbon until the end of the year as a commitment to remind people about the dangers of drinking and driving. 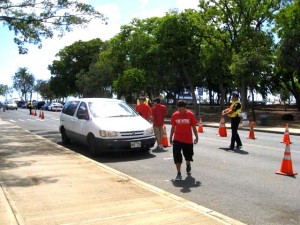 Last year, 18 traffic fatalities and injuries occurred during the holiday months of November and December in Hawaii. Â Eleven of those were alcohol-related.

“This going to be one of the most visible projects that the DOT and MADD will work on together in terms of its reach across the State,” said Jiro Sumada, DOT Deputy Director of Highways.Â  “All 1,500 of our airport and highways vehicles will have the red ribbons as a symbol of our commitment to keeping roadways and families safe.”

MADD’s mission is to stop drunk driving, support the victims of this violent crime and prevent underage drinking.