Hawaiian Airlines took delivery of its first new airbus during a ceremony at the Airbus factory in Toulouse, France yesterday.  The airline plans to integrate up to 27 new 294-seat airbus A330-200 planes into its fleet over the next decade under its long-range fleet renewal and expansion plan. 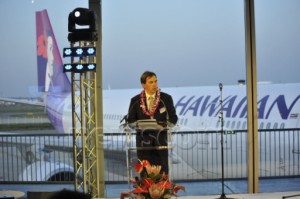 “Today’s ceremony marks an important moment in the history of Hawaiian Airlines as we pursue our plans for growth and expansion. These new Airbus aircraft will allow us to operate more efficiently and over greater distances, while also setting a new standard for passenger comfort and convenience,” said Mark Dunkerley, Hawaiian’s president and CEO.

The new airbus is scheduled to arrive at Honolulu International Airport on Monday where it will undergo preparation for service between Honolulu and Los Angeles on a route that is set to start in June.

“Hawaiian has a great reputation for service among its customers and our industry overall – and bringing Airbus wide-bodies into its fleet will serve to enhance that status,” said John Leahy, Airbus chief operating officer – customers. “We welcome the opportunity to be an instrumental part of the airline’s mission to better both economics and passenger appeal.”

Those in attendance at Wednesday’s event included a group of more than 200 Hawaiian Airlines employees and their guests who made the trip of 7,760 miles from Honolulu to Toulouse.

Hawaiian is leasing three A330s that are joining the fleet this year, and has signed a purchase agreement with Airbus to acquire seven A330s (starting in 2011) and six A350XWB-800 (Extra Wide-Body) aircraft (starting in 2017), as well as purchase rights for an additional five A330s and six A350s.