Hawaiian Airlines was granted tentative approval by the U.S. Department of Transportation (DOT) today to operate a single daily flight between Honolulu and Tokyo’s Haneda Airport. 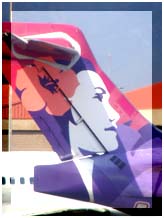 Hawaii’s largest and longest-serving airline plans to initially service the Honolulu-Tokyo flights with its Boeing 767-300ER aircraft seating up to 264 passengers, before adding its new and larger 294-seat Airbus A330-200 aircraft onto the route.

The Tokyo-Honolulu flights are a first step in Hawaiian’s long-term plan to expand its service in Asia and other international destinations using the 27 new Airbus A330s and A350s that the company expects to integrate into its fleet over the coming decade.

“We had applied for two round trips and remain convinced that our proposal would produce far greater benefits to competition than the other proposals and plan to ask the DOT to reconsider granting Hawaiian a second daily round trip,” said Mark Dunkerley, Hawaiian’s president and CEO.

The flight is scheduled to depart Haneda shortly before midnight and arrive in Honolulu around noon the same day, allowing Tokyo-area travelers to depart after a full day of work and dinner and arrive in time to enjoy a first afternoon in Hawaii. The return flight would depart Honolulu in early evening and arrive at Haneda around 10:00 p.m. the next day.

Hawaiian already offers a Japanese language website and has had a sales presence in Tokyo since 1973, and also previously operated the largest charter service between the U.S. and Japan in the 1980s and early 1990s.