A Maui company specializing in the production of products derived from the Noni plant, was recognized by the U.S. Department of Commerce this week. Noni Biotech International was awarded with the Department’s Export Achievement Award. 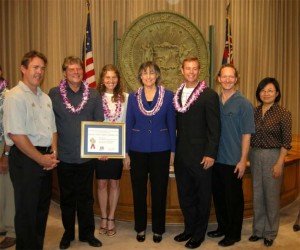 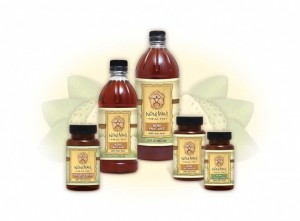 Noni Biotech International products include a body line of shampoos and conditioners.

The award recognizes the Maui company for excellence in exporting products made in Hawaii. The Hawaii Export Assistance Center provided ongoing support for Noni Biotech that allowed the company to make its first sale of a container to a new distributor in South Korea.

Company President and CEO David Backstrom along with company Vice Presdient and COO, Marie-Laure Ankaoua, accepted the honor at the Governor’s office on May 19, 2010. Governor Linda Lingle along with John Holman, Director of U.S. Commercial Service, presented the award, at the Hawaii State Capital building

The Export Achievement Certificate award signed by the Director General of the U.S. Commercial Service recognizes small and medium sized enterprises that have successfully entered the international marketplace.

“We are honored and very grateful for this recognition”, said Backstrom. “The U.S. Department of Commerce Export Center has been an invaluable partner to Noni Biotech as we worked together to expand the worldwide consumption of Hawaiian made Noni products.

VIDEO: Kahului School gets $25,000 grant to recoup losses from fire