Olympian Apolo Ohno touched down on Maui today as part of a sweepstakes aboard Alaska Airlines.  A special “Follow Apolo to Hawaii” themed-plane arrived at Kahului Airport with five winners aboard who will join Ohno in his first real vacation since his career took off.  (VIDEO below from Apolo’s visit to Maui) 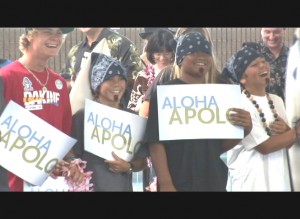 The Maui Surf Groms dawned faux facial hair and bandanas as a tribute to the Olympic icon who is recognized as the most decorated winter Olympian in U.S. history. Their hopes are to establish surfing as an official Olympic sport. Photo by Wendy Osher“I’ve never really taken a true vacation in the past 16 years of my career. I have a wonderful local sponsor, Alaska Airlines, who has been in a fantastic partnership with. It’s not everyday that you get to see yourself on the side of an airplane, so the first time I saw that I was pretty much freaking out. Then I saw it again this morning and I didn’t sleep the entire flight over here,” said Ohno.The short-track speed skater showed support for a hui of young surfers with Olympic dreams of their own, the first of which is to make surfing an Olympic sport.“I have a whole new respect for the water after I tried surfing,” said Ohno. “I wouldn’t say I surfed… I tried surfing,” Ohno said with a laugh. 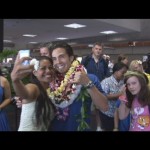 ”He likes to surf on the solid water,” said Maui Mayor Charmaine Tavares, who joined in welcoming Ohno to the Valley Isle.

Joining Ohno and Mayor Tavares was Lt. Governor James Duke Aiona who introduced the Maui Surf Groms who dawned faux facial hair and bandanas as a tribute to the Olympic icon who is recognized as the most decorated winter Olympian in U.S. history, with eight career medals.

“I want to acknowledge in the crowd, our surf groms from Wailuku.  I don’t know if I’m using the right parlance, but I think they’re stoked,” said Lt. Governor James “Duke” Aiona.  “And of course we want to wish them nothing but the best in regards to what they do everyday,” said Aiona.

“I feel very blessed to even be in this position.  I had a great dad in my life and I’ve decided to bring my core group of individuals who helped support me throughout my career to this trip back to Maui,” said Ohno.

“We saw a lot of his dad on the T.V.  If you were watching the Olympic games, they kept shooting him in the stands and he was jumping out of the seat most of the time, but what an exciting time,” said Mayor Tavares.

“Congratulations for all of your hard work and for producing what you’ve produced to really inspire especially the young people in our country,” Tavares said.

*** If you enjoyed this post, you may also like our story on Continental’s Increased Service to Maui.