Hawaiian Airlines today, re-launched a San Diego – Maui route for the first time in two years.  The seasonal flight will add non-stop daily service between the locations and will boos Mau’s air seats by 18,000 during the island’s peak summer travel season. 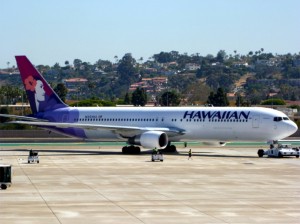 “We’re very pleased to again be offering the convenience of nonstop flights between San Diego and Maui and are supporting this service with some great airfares that will help stimulate demand for Maui’s visitor industry,” said Glenn Taniguchi, Hawaiian’s senior vice president for marketing and sales.

Hawaiian has designed the flight schedule to make Maui especially appealing to travelers from San Diego, allowing them to enjoy a first afternoon upon arrival along with a full day on the island before returning home. Flight #37 departs San Diego daily at 10:35 a.m. and arrives on Maui at 1:05 p.m. Return Flight #38 departs Maui daily at 10:30 p.m. and arrives in San Diego the following morning at 6:35 a.m.

Hawaiian is using its wide-body, twin-aisle Boeing 767-300 aircraft seating up to 264 passengers to operate the San Diego-Maui flight.

Hawaiian is offering the San Diego-Maui flight daily through August 24, 2010. This is in addition to the more than 24,000 seats for summer added by Hawaiian’s new Oakland-Maui service launched on June 4.

(Below is video from the newly announced Las-Vegas/Maui route that was announced last week and will be launched in October.)