(Update: 9:45 a.m. 8/11/10) Maui firefighters are now conducting mop-up operations after two fires in West Maui forced the four hour closure of the Honoapiilani Highway last night.  A fire at Ukumehame burned a total of 20 acres, while a separate blaze at Launiupoko burned an estimated 2 acres and burned two utility poles.  Both incidents were initially reported at around 5:45 p.m. Tuesday.  The smaller Launiupoko blaze was  declared 100% contained at about 3:30 this morning; air support was dispatched at first light this morning to assist with the larger Ukumehamehe fire where ground crews remain on scene to conduct mopup operations thoughout today.

The fire department’s specially trained wildland crews assisted with fire suppresssion efforts at both sites.  Crews from Napili, Kihei, Wailuku, and Kula stations were dispatched to Launiupoko; while firefighters from Lahaina, Wailea, Kahului, and Kula were called to Ukumehame.

According to Battalion Chief James Kino, 3 helicopters were assisting firefighters until nightfall yesterday at Ukumehame with assistance from 6 water tankers and heavy equipment provided by Goodfellow Brothers Inc. and the County’s Public Works Department.  The Ukumehame blaze came within 40 yards of the highway in some areas.  A few minor flare-ups reported overnight.

No injuries are reported at either site and the cause of both incidents remains under investigation.

(Update: 7:30 a.m. 8/11/10)  Maui firefighters gained 100% containment on a fire at Launiupoko early this morning (3:32 a.m.) and continue to battle a separate blaze at Ukumehame today.  The fires were first reported at around 5:45 p.m. Tuesday and forced the closure of the Honoapiilani Highway for about four hours.  The road was reopened in both directions at around 10:15 p.m. and remained open throughout the night.  The incidents are the latest in a rash of fires reported on Maui in recent weeks.

“The equipment itself is holding up,” said Maui Mayor Charmaine Tavares. “They barely get a break to just recharge everything they need to recharge in their engines and tankers.  The firefighters have been out a lot and I think eventually it is going to take its toll, but they’re trying to rotate firefighters so that they get sufficient rest.”

“If this continues at this kind of rate, then we’re really going to be stretching our forces and our firefighters to the nth degree,” said Tavares.

At daylight today, the Maui Fire Department’s Air One helicopter was launched to assist with the Ukumehame area, which was monitored by ground crews throughout the night.  No injuries were reported and the cause of both incidents is under investigation. 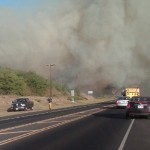 Photo Courtesy Steve Aheong. Smoke from a fire in the Ukumehame subdivision forced the closure of the Honoapiilani Highway at 6:13 p.m. 8/10/10. 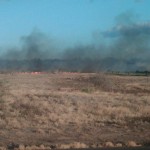 (Udate:  10:21p 8/10/10) Honoapiilani Hwy is now open in both directions.   Motorists are cautioned to expect slow moving traffic in the area due to traffic congestion. Motorists are advised that should there be a flare-up of the brush fire that would cause unsafe driving conditions the closure of Honoapiilani Highway may become necessary.

(Update: 10:12 p.m. 8/10/10):  Maui police are preparing to reopen the Honoapiilani Hwy in both directions.  Motorists are advised that delays can be expected as traffic resumes its normal flow.  The road has been closed since 6:15 p.m. due to two fires mauka of the Honoapiilani Highway.

(Update: 10p 8/10/10):  The Honoapiilani Highway remains closed between Maalaea and Puamana. No shelters are being opened at this time. The Launiupoko fire was under mop up operations at last report; however there was a flareup of the Ukumehame fire reported at around 9 p.m.  The back road through Kahakuloa is not an option for motorists because of the dark conditions and dangerous terrain.  We expect an update within the next 15 minutes, possibly at 10:15 p.m.

(Update: 8:59p 8/10/10):  The Honoapiilani Highway remains CLOSED between Puamana and Maalaea.  Fire officials report that the blaze at Launiupoko is undergoing mop up operations. The fire at Ukumehame is still active and the Honoapiilani Highway (Hwy 30) remains closed. No structures are damaged. Motorists are advised to avoid the Maalaea and Puamana area.

(Update: 7:28p 8/10/10):    Multiple fire crews from Lahaina, Napili, Kihei, Kahului and Wailuku are responding to 2 brush fires in West Maui that have caused the closure of Honoapiilani Highway due to heavy smoke. One brush fire is located near mile post 13 in Ukumehame on the mauka side of Honoapiilani Highway and a second brush fire is located on the mauka side of Launiupoko Park. The fires were reported around 5:45 p.m. tonight. Of concern at this time is night visibility and wind conditions. Heavy equipment are placing fire break lines in the affected areas. Before nightfall, Air One and Air Two were deployed to assist firefighters with water drops. No injuries are reported, cause is unknown at this time.  Maui Police have closed the highway between Puamana and Buzz’s Wharf Restaurant in Maalaea. Motorists are advised to avoid the Maalaea and Puamana area.  (Update courtesy: County of Maui)

(Update: 7:19p 8/10/10): The Maui Fire Department continues to battle two separate fires: one at Ukumehame and another at the Launiupoko Park area. The Honoapiilani Highway is now closed from Buzz’s in Maalaea to Puamana Park in Lahaina.

(Update:  6:13p 8/10/10): A Brush Fire in the Ukumehame Subdivsion area has forced the closure of the Honoapiilani Highway (Highway 30).  The Highway is closed in both directions between Ukumehame at mile post 13 to the area of Puamana Park.  There is heavy smoke that forced the closure of the highway at around 6:15 this evening.  We are also recieving reports of a separate fire near Launiupoko.  Motorists that need to get into or out of West Maui are advised to wait until the road has been reopened.  There is no estimated time on re-opening, however we will keep you posted as updates become avialable.