Introduction: Hi, my name is Representative Angus McKelvey.  It’s been my honor to serve the 10th District which is West Maui, Maalaea, and two streets in North Kihei since 2006.  I was born and raised in Hawaii.  I was actually born in Honolulu, and raised and grew up in Lahaina my whole life.  I am running for reelection again to continue work on infrastructure, which has finally gotten going after 30 years of non-action; as well as to push to continue to streamline the procurement code, so that government 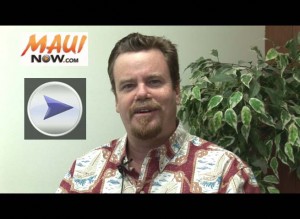 can be more efficient in getting projects out and people can get back to work; as well as moving forward on renewable energy, agriculture and sustainability issues; as well as other types of issues, including election reform, and business reform, particularly that for small business.

Lahainaluna boarding program:   What do you think about the Lahainaluna boarding program—should it continue to get state funding, or should it look elsewhere to sustain operations?  If funding is kept—what areas of education should be cut instead. Answer:  I’m a big supporter of the Lahainaluna Boarding program.  I was the leading advocate in the fight to help save the funding, not only during the legislation, but during the legislative session, when the Board of Education was looking at cutting the program.  I support state funding for the Lahainaluna Boarding program as well as other categorical programs because they offer education opportunities to kids that otherwise would not exist.  The Lahainaluna Borders actually save the state money because they do repair and maintenance projects on the campus that they would otherwise have to hire fully contracted people for under collective bargaining with benefits and other types of pay that would far outstrip the amount of money that is spent on the Boarding program each year.  I continue to support the funding for the boarding program.  It’s only $300,000–when you compare it to the overall Department of Education, which is 41% of the entire state budget–it’s a very manini piece.  I think however, ways we can improve the program and make it better, as well as to offset the cost to the state are to do two things.  One is to go ahead and to engage in public-private partnerships.  I am hoping to introduce legislation next year that would allow for a partial income tax credit offset for companies that go ahead and make donations of services and products to categorical educational programs.  If we want to have STEM science and education and math–like Ellison Onizuka Center; if we want to have navigation like the Nainoa Thomson Academy; and if we want to have agriculture and renewable energy studies like Lahainaluna Boarding program, we need to continue to support our categoricals.  But, engaging the private sector is the way to go.

Job Growth:  Two industries on Maui most impacted by the economic downturn have been the construction and tourism sectors.  What do you plan to do at the legislative level to get people in those trades back to work.  Answer:  Actually, one of the things we’ve already done–this last session I co-authored a bill that became known as the Local Jobs for Local People Bill, which mandates that any public works contract that are issued have to have at least 80% of the workforce have to be local residents.  In the private sector, we need to look at the permitting system.  We have to streamline permitting and put deadlines in permitting so that paper isn’t just simply pushed from desk to desk to desk, which is called agency review.  Under my Chairmanship of the Economic Development Committee, we passed Act 175.  It basically says that if a company is going to protest a procurement award, they need to put up 10% of the value of the project as a performance bond.  This way, we can stop frivolous protests.  One of these frivolous protests actually stopped the Lahaina Harbor project.  Because of this act, it just recently went out for bid, and it was awarded.  I’m very happy to say that you heard it here first, that the Lahaina Harbor project is going to finally get going.  This summer we’re going to have a ground breaking–very soon.

Tourism, actually the good news is that we have–many airlines are now opening exclusive routes to Maui:  Alaska Airlines, American, and others.  And they’re actually opening up more routes to Hawaii and cancelling routes to Mexico, because of the demand.  How we can go ahead and help that, is to look at perhaps elimination of the GET for fuel purchases outside the foreign trade zone here in Maui; as well as trying to go ahead and push continuing our airport improvement modernization plan so that when people get here, they have an experience of ease and comfort and they come back.  It’s the return visitors that spend more money and spend a longer time and make a bigger impact on our economy.

Economy:  What type of legislation do you hope to introduce or support to help stimulate the neighbor island economy.  Answer:  I look at the neighbor island economy in two facets:  job preservation, and job creation.  We pretty much eliminated all of the tax credits off the books.  They’re all going to die on December 31st of this year.  One of the tax credits I tried to extend this year was the research and development tax credit.  Unfortunately the governor vetoed it.  That is one of the biggest engineering facets for economic growth because these companies are coming into Maui and using the credit to hire local people.  Particularly those with technical backgrounds–those coming out of the University of Hawaii at Maui, as well as those who are returning National Guards men and women.  On the preservation side, I introduced a bill last year.  Unfortunately we had to put it to the side because we had a deal in the impending hike in the unemployment insurance rate.  However, it’s called Work Share, and what it does is allows companies to basically pay an employee part time to keep them full time.  They are allowed to use the unemployment insurance fund to go ahead and pay for those lost hours.  They keep their benefits, and for the company, they retain a skilled workforce, and they are able to not have to hire new people and retrain them, to expand and take advantage of the opportunity of the recovering economy as well as new visitors coming in.  I think we have to look at it sector by sector.  What’s good for the agricultural industry, may not work for the high-tech industry, may not work for the maritime industry.  However, I will continue to push for things like looking to perhaps floating state bonds and using state land for food processing centers for ag; bringing back the Superferry, and making sure it’s done right this time; as well as looking at all sorts of incentives.  But the one key is we really have to hit the ground running and get these bills on the governor’s desk and get them into law.

Honoapiilani Hwy:There are currently widening and realignment projects taking place on the Honoapiilani Highway but they do not address the immediate concern of traffic relief when there is a fatal traffic accident or a fire forces the extended closure of the road.  What alternatives do you envision to alleviate infrastructure concerns now?  Answer:  Actually, amazing work is being done.  For 30 years, no work was being done on the bypass or the widening.  The bypass now–the most important sector–is going full tilt, which is section 1A.  I actually have a law on the books that I passed my freshman year called traffic emergency zones that allows for when a road is closed, for the state to use the cane haul roads.  The one thing that we really need to do is to actually have the governor or the mayor (since it also applies to the county), make these kinds of declarations.  I was a big advocate of using the cane haul road system, but the problem is the DOT has done a study and there’s many bridges in between the cane haul road segments that are unfit to carry cars–they can’t support the weight.  So, what we realistically need to do is engage perhaps the private land owners to see if there are certain segments that we can pave and improve to create little alternate feeder routes around.  The big thing that’s going to make the biggest difference, and something that I’ve been pushing for, and unfortunately this Republican administration vetoed it, was the Intelligent Traffic System. Cameras will update drivers on real-time conditions–showing where the road closure is.  Bulletin boards would actually have up to date information.  And radio stations and web outlets would be able to show real-time traffic information, so that people aren’t sitting there in traffic, hoping that maybe the road will open, maybe it won’t.  Notification, use of the cane haul road, and getting a Traffic Emergency Zone declaration are things that can help, but things aren’t moving.

Closing thoughts:  It’s been my honor and privilege to serve the community of West Maui for the last six years.  Given the 30 years of inaction, I think amazing things have happened in just a small amount of time.  The dirt is flying.  If you look around the island of Maui and around the state, all of the highway projects that are being done, are being done in Lahaina.  The Lahaina Harbor project is finally coming back.  But there’s a lot more to do.  We’ve got to get the repair and maintenance backlog of our schools sped up; we’ve go to continue to streamline the procurement code; and most of all, we’ve got to continue to make government accessible.  And, you know, it’s all about customer service.  You are the customer, government is here to serve you, not the other way around.  I’m happy to say that we have balanced this budget the last two fiscal years by cutting over 55% of the budget with cuts and eliminations.  But we’re getting to the bare bones now.  The challenge I have to you, the voter, is if we are going to cut more, what ideas do you have to cut?  Now more than ever, you the public have to be engaged in the process because it’s your ideas that are going to really drive the next two years, and 10 years into the future.  You can reach me at my office in Honolulu on legislative issues at (808) 586-6160.  I can also be reached at my campaign cell phone:  870-8644; and if you see me on the side of the road or walking door to door, you can say, “Howzit braddah!”