Introduction: Aloha, My name is Norman Sakamoto.  I’m running for the very important office of Lt. Governor.  There are many issues facing our state, but certainly jobs and education are at the top.  A brief background:  I’m a building contractor, a civil engineer.  I went to University High School, graduated at the University of Hawaii at Manoa in Engineering, got my Masters Degree on the Mainland at the University of Illinois.  When I came back to Hawaii I worked as a general contractor.  That skill set– 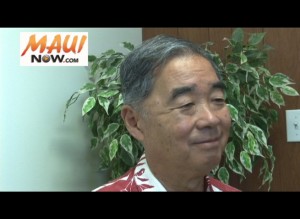 Click image to view Candidate Profile VIDEO of Norman Sakamoto, candidate for Lt. Governor for the state of Hawaii.

working as a general contractor, solving problems… basically what we need to do is look at the problems we have here on Maui, we can work together to solve them.  If we don’t we have issues that go on for decades.  Basically, I want to use the skill set I have to help us get more jobs going, infrastructure jobs out the door, not delayed by ongoing hearings.  Secondly, education:  I’ve been chair of the Education Committee in the State Senate for 10 years.  We’ve made improvements, but there’s much more that we need to do.  We’ve got repair and maintenance–we brought the backlog down from over $800 million–$640, $525, $415, $300–there’s more to do.  Basically, if we work together, we can have a place for every student can maximize his or her skills and be able to say yes; but, we’re not there yet.  We need to continue to help our teachers, help our principals, so we can have schools that will be a good place for each child to learn.

Puunene Prison:  Are you in support of or against building a Prison Facility in Puunene on Maui?   Answer:  I’ve seen the site.  I’ve seen the plans.  In general, they were’nt detailed plans.  I’ve also seen the existing prison site.  It seems that the existing prison site isn’t serving the needs of our community today.  The community has grown around it.  Certainly, there needs to be something done.  If the community feels it needs to be out near the Armory, that’s fine. It’s just that we need to hurry.  If we’re going to do it, lets do it, get it done.  We need the jobs not just building the prison, we need jobs here in Hawaii.  Every dollar that’s spent in Arizona, prisoners aren’t served here, it goes to out-of-state.  Let’s get jobs here building and actually expanding the facility and do what we can.  And certainly, Maui families can visit their loved ones here, and rehabilitate them, and get them back into the workforce. We need to do that quickly.

Honoapiilani Hwy: The widening/realignment of the Honoapiilani Hwy has been discussed for years, yet only a small portion is currently under construction.  How long will it really take and what alternatives do you envision to alleviate traffic now?   Answer: I think widening that highway has been an issue that has been on the County agenda for a long time.  One thing that concerns me is that I think the community needs to decide–does it make sense to spend millions of dollars widening the highway, but if there is a hurricane or an accident, the widened highway will then still be stopped?  Is there an alternative? I’ve heard that there’s talk about building a mauka side, another access.  So I think that if the community says building that other access is more important than widening the current highway, so be that; but I’m not here to say what you need to do.  If I’m successful as your Lt. Governor, I would though, like to get to that answer to either widen the highway, or build the alternative access first.  We can not do everything.  We have limited resources.  But let’s decide.  And I want to work with the Maui community on that.

Water Rights:  Re the water commission decision in East/West Maui:  Do you think the State Water commission was correct in its decision on instream water flows at East Maui and at Na Wai ‘Eha? Why or why not.  Answer:   Water issues are very challenging for Maui.  The Water Commission has information that I don’t have; HC&S has information; Native Hawaiian groups have information; the County has information.  I’m not here in a few minutes, to be able to say was the Water Commission right; but I am here to say that if I am elected to the office of Lt. Governor, I want to seek ways to solve problems such as water.  If on the Governor’s team, he says, “Sakamoto, as Lt. Governor, help Maui resolve these issues because we have challenges; we have needs for water for housing, for agriculture, for Native Hawaiian gathering rights, many, many things–do that,” I would gladly get involved.  One thing I do know, is we need to look long term.  As an engineer, building contractor, if we’re going to build reservoirs Upcountry to store water when we have extra water; If we’re going to bring transmission lines around from wetter areas to drier areas, those (projects) take years.  I believe we should start doing those things because ultimately, there isn’t enough water for all of the demands.  When deviding up a limited source–always people will say, “(there’s) not enough for me.”  Let’s work together on long-range plans, but quickly resolve the interim solutions.  But, it’s not an easy issue.  I’d like the challenge, if elected, to deal with that.

Furloughs: If elected to the post of Lt. Governor, what would you do to prevent a repeat of the Furlough Friday situation in Hawaii’s classrooms?  Answer:  The furlough Friday situation–that was a bad thing for schools, but actually all of state and county workers.  We’ve been focusing on the schools, and yes, the legislature did put some money aside from the Hurricane Relief Fund.  The Governor did release $56 million dollars of that to at least enable, this upcoming school year to have 17 days restored for instructional days.  That doesn’t cure all of furloughs for teachers, principals, custodians, or the rest of state and county government.  But what happened, I believe, is there was a disconnect–there wasn’t a trust–between the administration, the HSTA, and the parties involved to work toward a better solution.  The solutions put on the table at the time may have seemed, take it or leave it, and that’s not the way we need to do our business.  We need to build trust working every day of the year, not just when crisis come up, with the organized labor organizations, with the community, with parents, because better solutions come from communities working together.  For me as a general contractor, jobs come out better–have to come out better–when we work together on timing, on scheduling, on solving problems.  I want to be your Lt. Governor and help solve problems by working together, collaboratively.

Superferry: If given the opportunity, would you support the return of the Hawaii Superferry?  Answer:   The Superferry, sadly, got derailed and sunk by us, the government not doing the processes we should have done.  So judges–more than one judge–opined that this isn’t right.  Going forward, we need to do the approval process correctly.  If another investor group comes in and says we’d like to have a Superferry connect the islands, I think that’s a great thing to connect the islands.  But it needs to be done properly.  I just recently sat near a young mother on the airplane, and she said when the Superferry was running every other week, she’d come from Oahu to Maui because her children are here on Maui.  She has a job–in fact two jobs–now on Oahu.  People like that benefited by the Superferry.  Other people–contractors, ag people–benefited.  But it needs to be done properly.

Closing thoughts:  Again, my name is Norman Sakamoto.  I’m running for the very important job of our Lt. Governor.  If we can work together as a community, we can build on the many assets we have.  When we start picking at each other–whether it’s complaining about public schools, complaining about government–we end up just having delays, and everybody goes away half filled.  Nobody is satisfied.  As a contractor, as a father, grandfather, and engineer, we want the best for our islands. But we will be able to get the best only when we work together.  We have a campaign website: votesakamoto.com.  My legislative website: normansakamoto.com has information.  Bottom line, if we work together, and I know we can, our children’s children will say that Hawaii is a great place to live, rather than say Hawaii was a great place to live.  Aloha.  Mahalo.  And God bless you.