The Hyundai Tournament of Champions has announced that the 2015 event has raised $341,000 for Maui charities. The tournament and host organizations have donated a grand total of over $5.3 million to Maui community charities since its move to Maui in 1999.

The six primary beneficiaries of the 2015 tournament are:

As part of their affiliation with the tournament, these beneficiaries assisted in promoting the event, offsetting costs, providing volunteers and more.

In addition, a donation was made to both the Hawaiʻi State Junior Golf Association and Maui Junior Golf for their commitment to promoting and growing the game of golf among the state’s youth.

Several local nonprofits also benefited from the tournament through its Golf for Maui Charities program, which gave 501(c)(3) organizations the opportunity to promote the sale of tickets to this year’s tournament and receive 100% of the net proceeds.

Significant donations were also made to Kapiolani Medical Center for Women and Children via Hyundai’s Hope on Wheels program and the Hope on Wheels 5K held during tournament week. Hyundai’s nonprofit Hope On Wheels is committed to helping kids fight cancer. It is among the leading private funders of pediatric cancer research in the US.

The 2016 Hyundai Tournament of Champions will return to The Plantation Course at Kapalua in early January 2016. All four competitive rounds will be broadcast on Golf Channel. 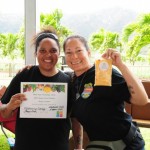