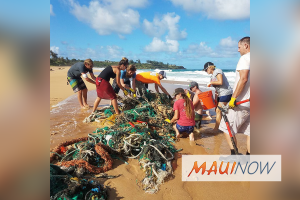 Team members and volunteers from each of the islands conducted a total of 137 community cleanup events and 668 derelict net recovery patrols from July 2016 through June 2018. An estimated 50.9 percent of the debris removed consisted of nets, rope, and line. The shores of Kauaʻi had the most debris, followed by Hawaiʻi island. Less than 5 percent of the debris came from both Maui and Lānaʻi.

“We are honored to be a part of the growing effort statewide to remove and reduce the threats of plastic pollution to marine wildlife along our shores,” HWF Hawaiʻi island program director Megan Lamson said. “Together we can both recover debris washing in from near and far, and commit to refusing to be a part of the ever-increasing problem of single-use plastics used and disposed of here locally.”

Of the 369,393 pounds of debris collected, an estimated 44.4 percent was gathered from local landfills by reuse, recycling, and energy re-capture through the NOAA Nets-To-Energy Partnership and local/global art or research projects. In collaboration with Studio KCA, 11,415 pounds of debris from Hawaiʻi and Kauaʻi islands were used to create a life-size blue whale statue that was on display in Bruges, Belgium from May to September of this year. The statue is now on its way to the Netherlands.

In addition to conducting coastal cleanups, the project distributed marine debris surveys as a part of ongoing research efforts. Sixty nine surveys were conducted on five different “survey sites,” including 51 surveys over three sites on Lāna‘i, four surveys on a site in Maui, and 17 surveys at Kamilo Point on Hawai‘i Island. According to HWF, this information is crucial to identifying major sources and types of marine debris and plastic pollution in Hawai‘i.

This 2-year project involved 25,471 volunteer hours and the help of many local business. The HWF said all of this help allowed the project to collect over two times amount of marine debris they expected to collect.