Pedestrians across the state may be interested to know of revisions that go into effect today on a crosswalk law.  If a signal is equipped with a countdown timer, it is illegal for a pedestrian to start crossing the road in the direction of the signal if the countdown has already begun.  The clarification on the old law goes into effect today.

Under Act 133, if the pedestrian is already in the crosswalk when the flashing countdown begins, they can continue their transit across the crosswalk to a sidewalk or safety island before the countdown timer ends.

Prior to this update on countdown timers, the law referred only to the “Upraised Palm” Don’t Walk signal, leaving some confused about the effect of the countdown.

“As one of the primary sponsors of the bill, I am proud that we have maintained our focus on pedestrian safety and helped make our crosswalks that much safer,” said Senator Senator J. Kalani English (Dist. 7: Hāna, East and Upcountry Maui, Moloka‘i, Lāna‘i, Kaho‘olawe). “Of course, there is more to be done, and I am confident we will continue to make headway in protecting pedestrians and otherwise improving our traffic laws.”

The fine for a violation is $130, but it is not expected to be the focus of traffic enforcement efforts, according to police.

Lt. William Hankins, Commander of the Maui Police Department’s Traffic Section said, “It’s something we can enforce.  We have other priorities, but if someone is blatantly disregarding the law,” he said, officers have the ability to issue a citation.

According to Lt. Hankins, it’s hard to tell if there will be an impact on traffic statistics. “It’s yet to be seen…  Common sense comes into play for a lot of it.  If you’re in the middle of an intersection, you’re obviously not going to turn around and go back.”

“To be honest, it’s a safety measure put into place–something people already know about the ‘big red hand.’  When the red hand is up, that’s telling people not to cross.  That’s already been on the books for years.  This is just a clarification.  Think of it as a red light for pedestrians.  Don’t go,” he said.

The countdown timers are in place at many of the larger intersections around the island including major crosswalks like Piʻikea/South Kīhei Road, and the entrance of the Kʻahumanu Shopping Center in Kahului.

According to Senate Bill 693, countdown timers show pedestrians how many seconds are left to cross the street before the pedestrian signal changes from a flashing “Don’t Walk” to a steady “Don’t Walk” or upraised palm indication.

The following is a guideline of what a pedestrian should and should not do when they observe different indicators: (as outlined in SB693)

At Least 5 of Maui’s Traffic Fatalities so Far this Year Involved Pedestrians: 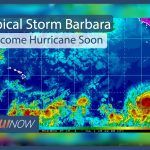