Today marks the 176th anniversary of Lā Hoʻihoʻi Ea the day in 1843 that sovereignty was restored to the Hawaiian Kingdom after a brief British occupation.

“On July 31, 1843, the first Hawaiian Kingdom national holiday was established,” said Kahoʻokahi Kanuha in a daily video address posted online. Kanuha is one of the leaders at Puʻuhonua o Puʻuhuluhulu, where an ongoing demonstration is now in week three.

The demonstration started 18 days ago by various groups who believe that Maunakea is sacred and say construction atop the mountain will further desecrate the site.  On Tuesday, the governor rescinded an emergency proclamation at Maunakea and the state issued a two-year extension to Sept. 26, 2021 on the deadline to initiate construction of the Thirty Meter Telescope project atop the mountain.

Kanuha issued a call for supporters to join in today’s celebration at the base of Maunakea Access Road, saying the observation includes music, hula, speakers and workshops.  “It’s a time for us to come together and celebrate our history, our sovereignty, which,” he said, “we know has never been relinquished and to get together, and use this time to lift up our spirits and gather.”

Andre Perez, a fellow leader at Puʻuhonua o Puʻuhuluhulu said the observation is also being held in remembrance of the day the proclamation was made: ‘Ua mau ke ea o ka ʻāina i ka pono,’ ‘the life/sovereignty of the land is perpetuated in righteousness/justice.’

“Just like our kupuna made a stand, we are making a stand today in 2019 for justice to protect Maunakea from development,” said Perez in a video address.

Among the most vocal celebrities against the TMT project at Maunakea, Jason Momoa arrived at the demonstration site just before noon today.  Kāko’o Haleakalā documented the event in the live video stream.

Momoa who starred in Game of Thrones and more recently in Aquaman, voiced his concerns in 2015 via social media by circulating a shirtless picture of himself with the words “We Are Maunakea” written on his chest in protest against telescope construction.  The image went viral on social media platforms with fellow celebrities answering his call by posting similar images of themselves with the phrase scrolled on their bodies.

Those in support of the Thirty Meter Telescope say they believe in the co-existence of culture and science atop the mountain.  Governor David Ige on Tuesday said, “We continue to seek and find a peaceful solution to move this project forward.” 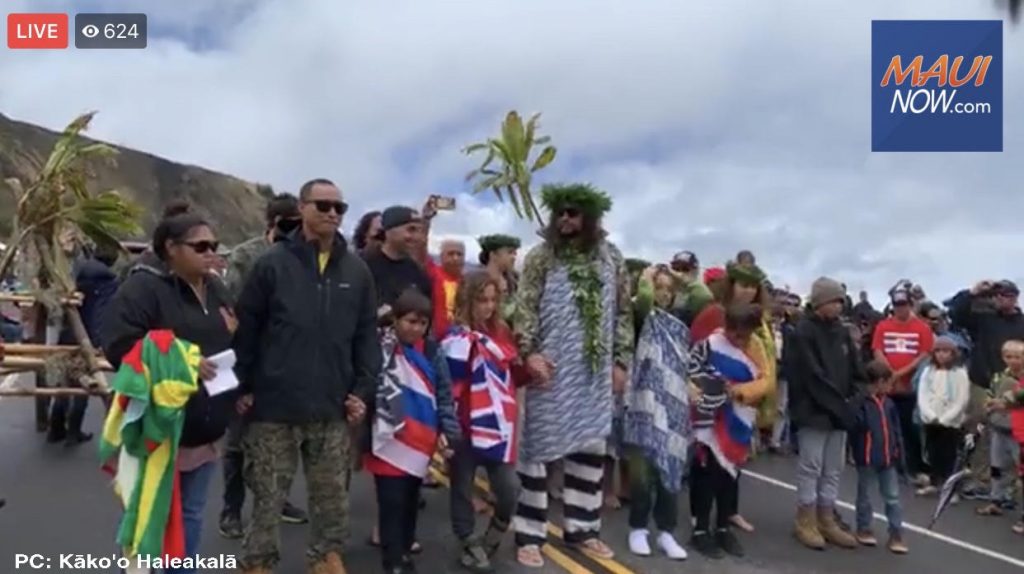