Protest Convoy on Maui Planned from Lahaina to Kahului Airport at 1 p.m.

The Maui Police Department issued a traffic alert late last night, advising motorists to make necessary adjustments to their schedules this afternoon and arrive at Kahului Airport early for flights.

Police say the traffic alert was issued due to the potential for a planned protest convoy from Lahaina to the Kahului Airport beginning at 1 p.m. today (Monday, Sept. 9, 2019).

The advisory comes amid heightened tensions atop Maunakea on Hawaiʻi Island where a demonstration against the Thirty Meter Telescope nears 60 days.

On Friday, state crews removed an unpermitted structure near the demonstration site, cutting a Hawaiian flag in the process.  The manner in which the flag was removed from the structure sparked heavy criticism and prompted an impromptu walk-out on Friday afternoon of middle school students at Kamehameha Schools Maui campus in Pukalani.

The motorcade is expected to leave Lahaina around 1 p.m. and travel toward Kahului Airport. It was unknown how long it would take the group to reach the airport. County officials advise “visitors staying in West Maui and having reservations on afternoon flights would be among those impacted. It’s recommended that they leave for Kahului Airport before the motorcade begins.”

On Sunday, supporters of Mauna Kea protesters organized a cross-island convoy along H-1 from Hawaiʻi Kai to Waiʻanae.

The Maui convoy will leave Lahaina at 1 p.m. and proceed to designated meeting points where additional vehicles will join. The convoy is expected to travel at the posted speed limits of between 30-45 mph. It will arrive in Māʻalaea at around 1:30 p.m; at the Kīhei Junction at 1:30 p.m.; and in Waikapū at 1:45 p.m.. The convoy will then pass the county and state buildings in Wailuku, turn down Main Street, proceed down Kaʻahumanu Avenue to another designated point at the Old Kahului Shopping Center (near Burger King), and then continue to Kahului Airport.

There are 10 designated parking spots at Kahului Airport set aside for those involved with the demonstration. The posted maximum speed limit at the Kahului Airport is 15 mph. During a convoy organized two months ago, four participants were issued citations for driving too slow and impeding traffic flow. 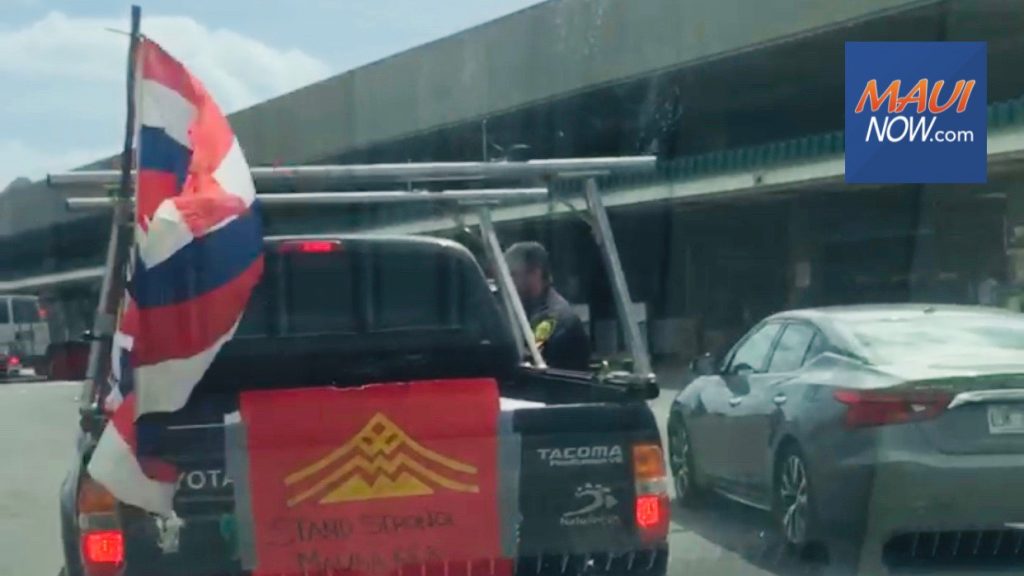