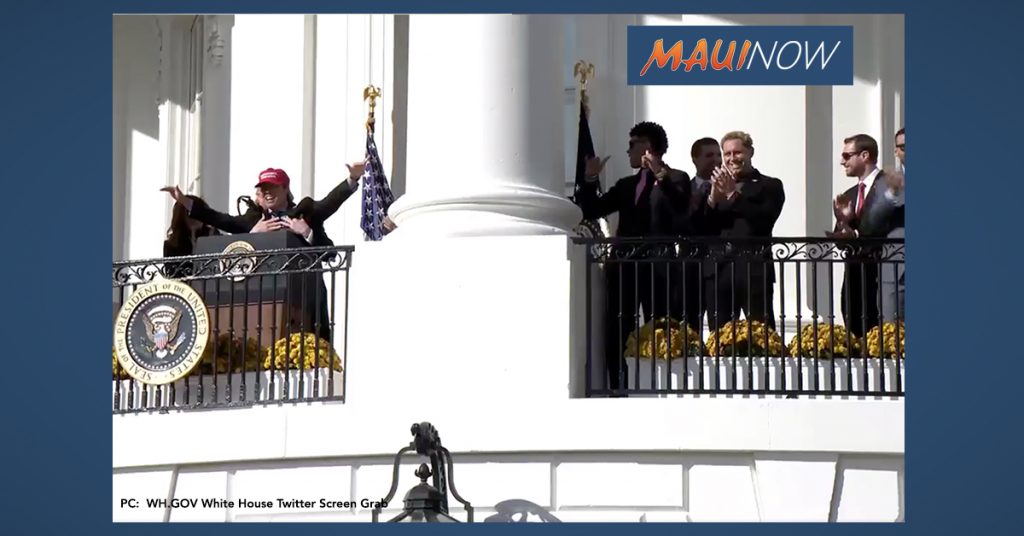 Maui’s Kurt Suzuki made national headlines today when he was introduced by President Trump during a recognition event at the White House for the members of the World Series Championship team.

The Baldwin High graduate was prompted by someone off-screen to grab a MAGA hat, and with arms raised, the President gave Suzuki a gentle bear hug from behind. (See video below at the 10 minute mark).

In introducing Suzuki, President Trump said, “In the bottom of the ninth you scored seven runs.  I do remember that well– including an amazing three-run homer by Kurt Suzuki. Where’s Kurt? Where are you?”

As Suzuki stepped to the podium, someone from the balcony could be heard telling him to “grab a hat.”

Suzuki put the “Make America Great Again” baseball cap on and said just a few words: “I love you all,” twice, then “Thank you,” and flashed a double fist shaka to the crowd.

“What a job he did.  I didn’t know that was going to happen,” said the president.

The Washington Post, New York Post, USA Today and Time were among the media giants that captured the moment on video and shared it to readers and fans online.

Maui’s Kurt Suzuki is still on an emotional high from Wednesday’s World Series win.  The Baldwin High School graduate took a moment to catch up with Maui fans via Kanoa Leahey’s “Lets Talk Sports” program on ESPN Maui 900 AM.  Click HERE for the full length interview.