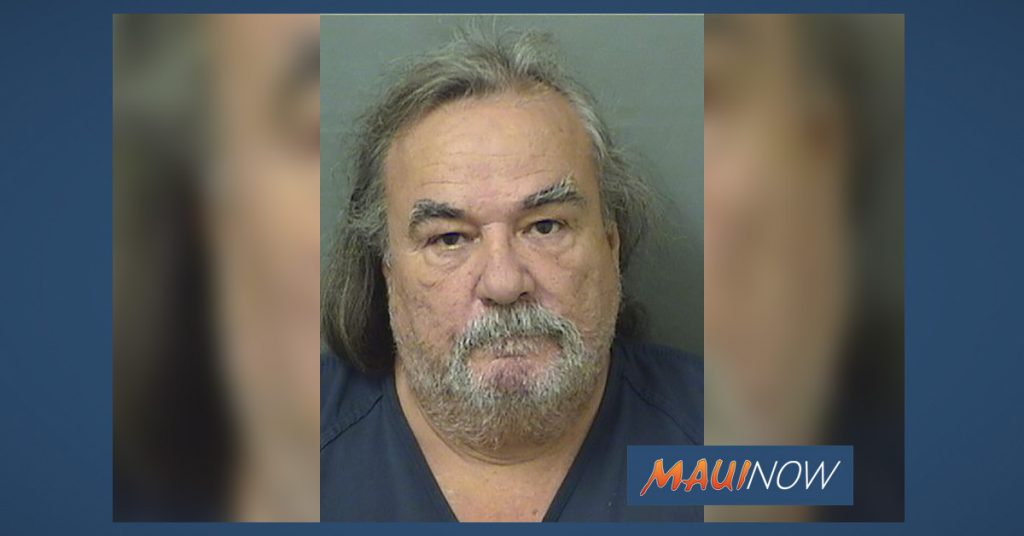 A 59-year-old man was arrested in Florida on Thursday after a Maui Grand Jury returned an indictment against him for the murder of a woman on Maui nearly two decades ago, according to Maui police.

Arrest records show that Anthony Moreno was taken into custody at 2:58 p.m. on Thursday, Dec. 5, 2019 at an address in West Palm Beach Florida. Maui police say Moreno was arrested by the Palm Beach Sheriffs Marine Unit for the 2000 murder of Kimberly Belluomini at her residence in Kīhei.

Police say that in October of 2000, Belluomini and Moreno were at Henry’s Bar in Kīhei.  “They went to her apartment at South Point. The following morning, Belluomini was found dead within her
apartment.”

Stacy Ovendale, who worked with Belluomini at the Maui High Performance Computing Center at the time, said she was the one who sent people to Belluomini’s apartment after she didn’t show up for work.  In online communication with Maui Now, Ovendale said she worked in security while Belluomini worked in the accounting department, and the two were good friends.

Ovendale, who remains in contact with Belluomini’s mom and brother, said new technology, additional tests and further review of the case helped.  Ovendale tells Maui Now that she believes Belluomini was unknowingly drugged and that Moreno allegedly jumped into the cab that Belluomini was in without asking.

At the time of the initial investigation, police say Moreno was interviewed as a person of interest in the case however no charges were brought against him.

Since then, Detectives with the Maui Police Department’s Criminal Investigation Division continued with the case and were able to successfully bring an indictment against Moreno for a single count of murder in the second degree.

This is the second cold case indictment on Maui in recent months.  In October, a Maui Grand Jury indicted Bernard Brown, charging him with second degree murder in the disappearance of Moreira “Mo” Monsalve in January of 2014.  In court yesterday, the trial in Brown’s case was set for March 16, 2020.

In the intervening time Moreno has resided in both Texas and more recently Florida, where he located yesterday morning, living on a boat in a Marina in West Palm Beach, according to police.

Moreno was indicted for the murder of Belluomini on Nov. 22, 2019.  His bail is set at $1 million dollars.  Moreno is awaiting extradition proceedings.

While police said there were also allegations of rape, the charge was not included in the indictment, according to our sources.

Prosecutors and Judiciary officials were unable to release details of the indictment since it is still sealed.  That information usually becomes available after an arrest, but Moreno is not yet in the custody of Maui police and police say it remains undetermined if he will fight extradition or agree to transport.

Court records show that Moreno was on Maui in the late 90’s and early 2000’s.  He has a list of traffic infractions on Maui, including driving with a suspended or revoked license in 2003, criminal contempt of court and driving while under the influence of an intoxicant in 1997.