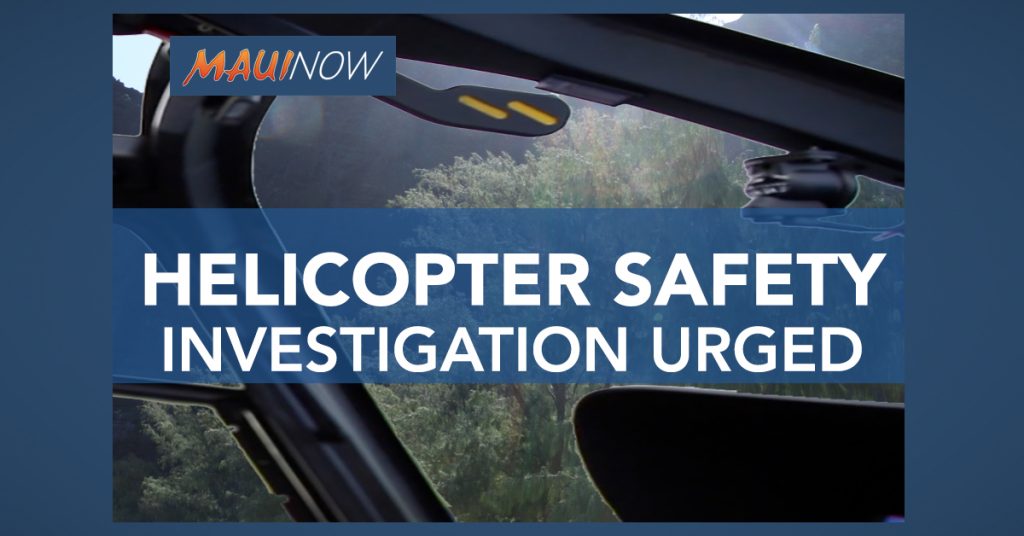 US Senators Brian Schatz and Mazie K. Hirono of Hawai‘i are calling for an investigation into the Federal Aviation Authority following a new Senate report and whistleblower complaints.

The report from the Senate Commerce Committee, details how repeated warnings about the safety of helicopters in Hawai‘i were allegedly ignored by the federal regulator’s leadership.

“For the past year, we have raised concerns that the FAA has ignored warnings about the safety of aircraft operations. This report exposed troubling new accounts about how the FAA failed to take action on warnings about the safety of helicopters in Hawai‘i – warnings that could have saved lives,” said Senator Schatz, a member of the Subcommittee on Aviation and Space. “With more than a dozen helicopter accidents in Hawai‘i over the last five years, it is clear that we need answers from the FAA and stronger protections to keep people safe.”

In the past year, Hawai‘i has experienced two tragic accidents involving air tour operators.  The complaint comes on the heels of a fatal tour helicopter crash on Kauaʻi that claimed the lives of seven on board last month.

“Safety is a key mission of the FAA, and the whistleblower allegations that the Honolulu Flight Standards District Office knowingly failed to meet this mission deserve immediate action and a thorough investigation,” Senator Hirono said. “I strongly support the Senate Commerce Committee’s request for such an investigation by the Inspector General of the Department of Transportation and will continue working with Hawai‘i’s Congressional Delegation to determine necessary actions to ensure accountability and safety for Hawai‘i’s aviation operators and travelers.”

The senators are asking the inspector general to launch an investigation into specific oversight lapses raised in the complaints, as well as policies and procedures within the Office of Aviation Safety, and Hawai‘i Flight Standards District Offices.

In July, Schatz and Hirono voted against the confirmation of Stephen Dickson as FAA administrator over reports he allegedly ignored safety warnings while he served as an executive at Delta Air Lines.

The full text of their letter to the DOT Inspector General is below:

The recent air tour tragedies that have occurred in Hawai‘i have shaken public confidence and raised concerns with the safety of the air tour industry. The US Senate Committee on Commerce, Science, & Transportation has released details of an investigation into helicopter safety which highlights flaws in internal FAA safety culture. The report includes a whistleblower complaints alleging that the FAA directly disregarded serious concerns about the safety of helicopter air tours in Hawai‘i.

We request that you launch an investigation into the specific oversight lapses raised by the whistleblowers as it relates to helicopter operations in the State of Hawai‘i, as well as policies and procedures within the Office of Aviation Safety, the Western-Pacific Region, and the Hawai‘i Flight Standards District Offices that may result in increased risk to operators, passengers, and the general public.

Thank you for your attention to this important matter. We look forward to your updates and report