BREAKING: Diana Ross in Hawai‘i for Mother’s Day: Maui Concert, May 10 and 11 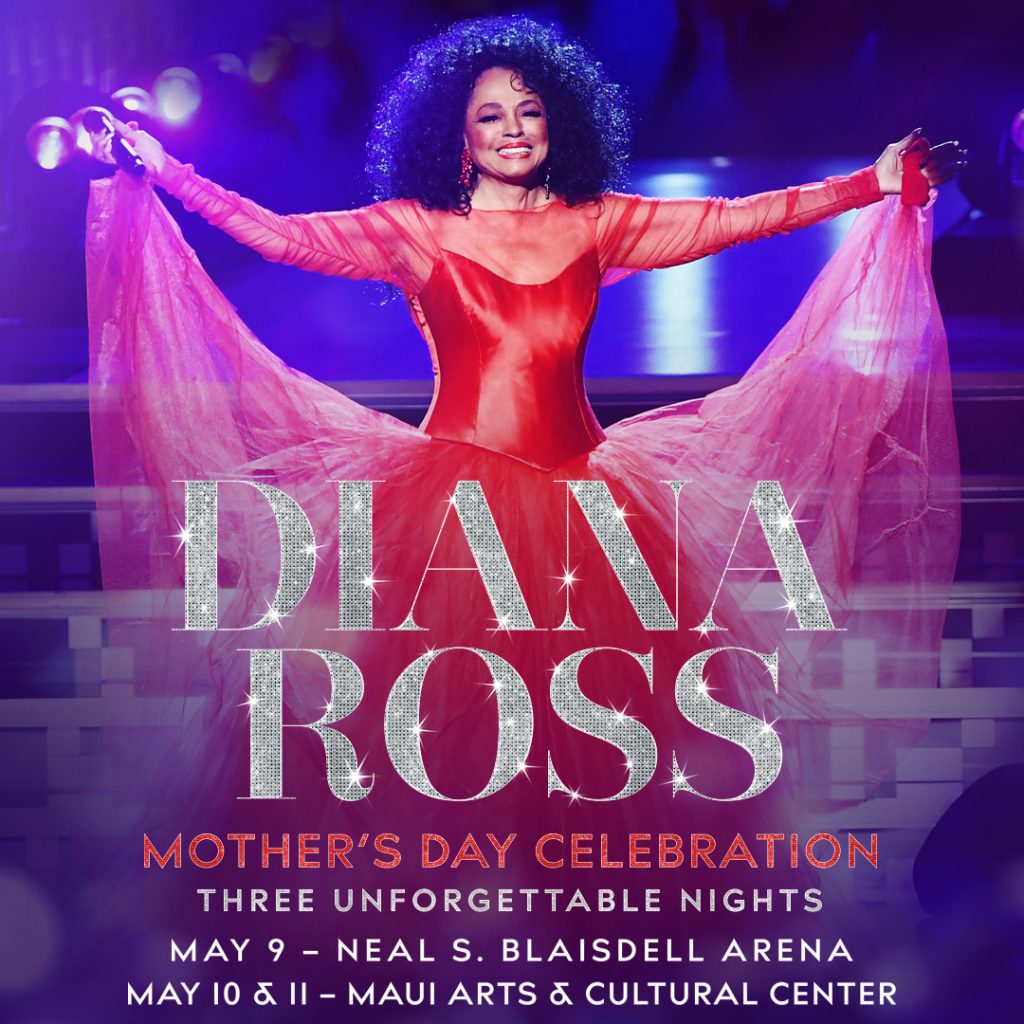 International Superstar, Diana Ross has three Hawaiʻi concerts planned in May, two of them on Maui. The Mother’s Day celebrations include a May 9 show at the Neal S. Blaisdell Arena; and two Maui shows–May 10 and 11 at the Maui Arts & Cultural Center.

Ross issued a statement about the Hawaiʻi shows, saying:

“Aloha Hawaiʻi. I am so excited and looking forward to sharing an evening of love and joy with your beautiful ʻohana to celebrate a fabulous Mother’s Day in Hawaiʻi. Join me for this Happy Mother’s Day celebration. Let’s have some fun. See you soon.” — Diana Ross

Diana Ross defines icon. A remarkable career spanning over 50 years, Diana Ross considers her greatest accomplishment to be that of raising her five children. Seeing them flourish and becoming successful adults in each of their chosen fields, she remains the nucleus of a solid family that has expanded and gifted her six beautiful grandchildren.

Ross’ international achievements were acknowledged by the prestigious Kennedy Center Honors in Washington DC (2007). The honor celebrated her lustrous career of excellence in music, film, television and theatre, as well as her culture influences and humanitarian. The National Academy of Recording Arts & Sciences celebrated her remarkable career with its highest honor, The Grammy Lifetime Achievement Award in 2012.

From her landmark solo career to the early days as the leader of The Supremes, Diana Ross helped to shape the sound of popular music, changing the landscape and paving way to contemporary music.

Her voice, described as “honey with soulful sensibility,” produced 14 Top ten albums, 43 #1 songs and music sales exceeding 100 million units around the world. The latest in a string of #1s includes four consecutive dance club hits, including a new remix of the 1971 classic, “Ain’t No Mountain High Enough 2017” which topped the Billboard Dance Club Chart. Followed by “I’m Coming Out / Upside Down 2018” remix and “The Boss 2019” remix.

In 2017, the American Music Awards presented Ross with the Lifetime Achievement Award. In 1993, she earned a Guinness World Record for her success in the United States and United Kingdom by having more hits than any other female artist on the charts with a career total of 70 hit singles.

Other music career milestones include induction into the Rock & Roll Hall of Fame, National Academy of Recording Arts & Sciences Hero Award, Billboard’s Female Entertainer of the Century Award and one of few celebrities to have two stars on the Hollywood Walk of Fame.

On July 21, 1983, Diana Ross drew a crowd of over 1.2 million people to New York’s Central Park, and mark one of the biggest audiences in history for a live concert.