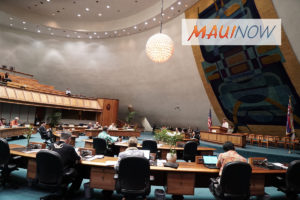 Five of the eight Hawai‘i awardees are women.

“The majority of today’s small business awardees are women entrepreneurs. Meanwhile, most of the state’s boards and commissions and private corporate boards remain male-dominated,” Sen. Roz Baker (D-South and West Maui) said in a press release.

Sen. Laura Thielen (D- Kailua, Lanikai, Enchanted Lake, Keolu Hills, Maunawili, Waimanalo, Hawai‘i Kai, Portlock) said, “This ceremony shows there are a wealth of women in Hawai‘i qualified to sit on these seats and make substantial, positive contributions. That is why we introduced a bill requiring gender parity on private boards, and included a resolution in the Women’s Legislative Caucus package that encourages the Governor, and other appointers, to achieve gender parity on state boards and commissions.”

Sens. Thielen and Baker are the Senate co-chairs of the Women’s Legislative Caucus.

The caucus introduced as part of its legislative package resolutions calling for appointing authorities to dedicate themselves to achieve gender parity on state boards and commissions and circuit court.

Other legislation of interest include bills that require publicly held domestic and foreign corporations to include certain numbers of females among their boards of directors, and authorize administrative fines for noncompliance. This bill passed the Senate Judiciary Committee on February 25 and the full Senate on March 3 and has been referred to the House of Representatives.

The United States Small Business Administration (SBA) is a federal agency whose mission is to aid, counsel, and protect small business concerns, preserve free enterprise, and bolster our economy.

Small Business Person of the Year

Since 1998, Integrated Security Technologies has been a leader in delivering quality electronic security solutions that protect Hawai‘i’s government, businesses, and employees. Notably, the company is woman-owned and is noted as one of the best places to work in the past couple of years. Lanning has been instrumental in “leading Hawai‘i to a safer place,” and has been a leader in creating connections and building bridges, paving the way for women and minorities in security. She will represent Hawai‘i in the national Small Business Administration awards.

Family-Owned Business of the Year

The Uyeda Shoe Store has been helping customers find the perfect fit for 105 years. Takashima’s grandfather originally repaired shoes, eventually expanding the business into a shoe store. She is the business’ third owner and has since put her own touch into running the business, notably adding new merchandise and providing shoes that can’t be found elsewhere for their loyal customers.

Young Entrepreneur of the Year

In 2019, Penaroza led Tag Aloha to a new tier. She diversified the business to add new products and lines, expanded to new markets outside of Hawai‘i, doubled the company’s number of employees, invested in new marketing resources and channels, brought the company into its first-ever Made in Hawai‘i show. Her ability to seek out creative growth opportunities, develop new ideas in uncharted space, and continually learn new skills to benefit her business and Hawai‘i’s business community distinguish her as an outstanding SBA’s Young Entrepreneur.

Understanding the difficulties in navigating and establishing oneself in the business world, Taschner founded Business Law Corps to “connect local entrepreneurs with law firms willing to provide pro bono legal services.” She coordinates the BLC’s outreach and placement of direct legal service matters, working directly with Patsy T. Mink Center for Business and Leadership and the Hawai‘i Technology Development Corporation to provide free weekly legal consultation to clients. She conducts free consultations and seminars on basic issues that face small businesses, such as choice of entity, intellectual property, and raising capital.

Dawson works tirelessly to improve and enhance the Native Hawaiian community in more ways than one. She has dedicated multiple resources to support Native Hawaiian businesses, and she has established and administers programs that directly benefit Native Hawaiians and promote the language, arts, and culture. Beyond financial affairs, she regularly dedicates time to testify in support of Native Hawaiian issues and serves on various advisory councils and committees, such as the Native Hawaiian Organizations Association Legislative Committee.