Maui Jail Population Drops By 71 Inmates Over One Month 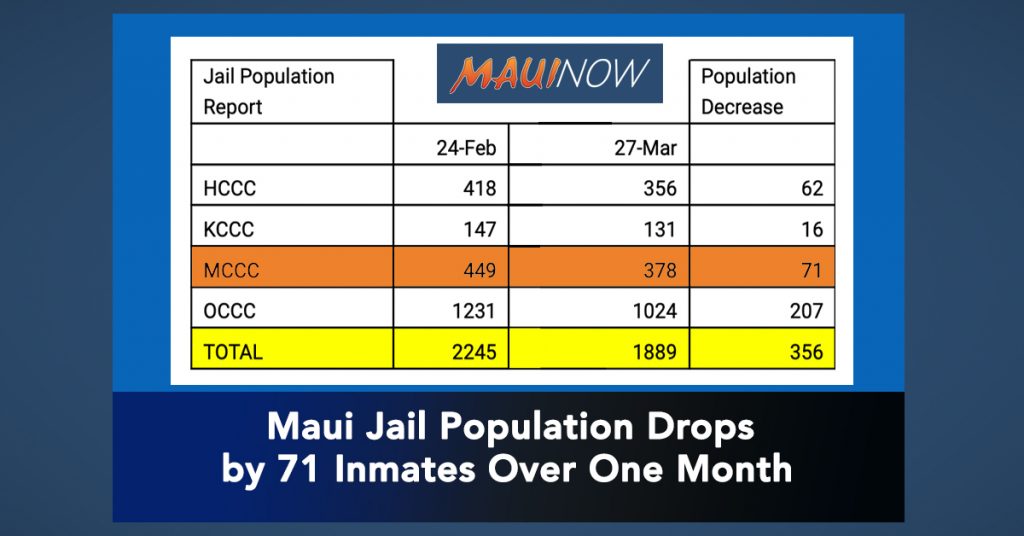 The jail population across the state has experienced a marked decrease in inmates as the Department of Public Safety finds ways to temporarily reduce the number of people in jails and prisons amid the COVID-19 pandemic.

Between Feb. 24 and March 27, the inmate population, which has experienced problems with overcrowding in the past, decreased by 71 inmates from 449 to 378.  Statewide, the prison population over the same period dropped by 356 inmates to 1889.

The Department reports that as of March 27, 2020 no inmates have met PUI (Persons Under Investigation) criteria for COVID-19; however, the department notes that it is “well aware of the risks of over-population and crowding” especially during the pandemic.

“We are taking proactive measures with our criminal justice partners, including the Office of the Attorney General, the Judiciary, County Prosecutors, Office of the Public Defender and the Hawai‘i Paroling Authority, to find ways to temporarily reduce the number of people in our prisons and jails, while keeping the overall safety of the community our top priority,” said PSD officials.

The department outlined the following measures it is taking to provide inmate population relief:

“Health care staff have had continuous, open dialogue with the Department of Health and facility staff are being briefed on protocols as the situation changes day-by-day,” said PSD officials.

The department reports that staff have been reminded to frequently wash their hands and refrain from touching their faces, per Centers for Disease Control and Prevention-recommended guidelines.