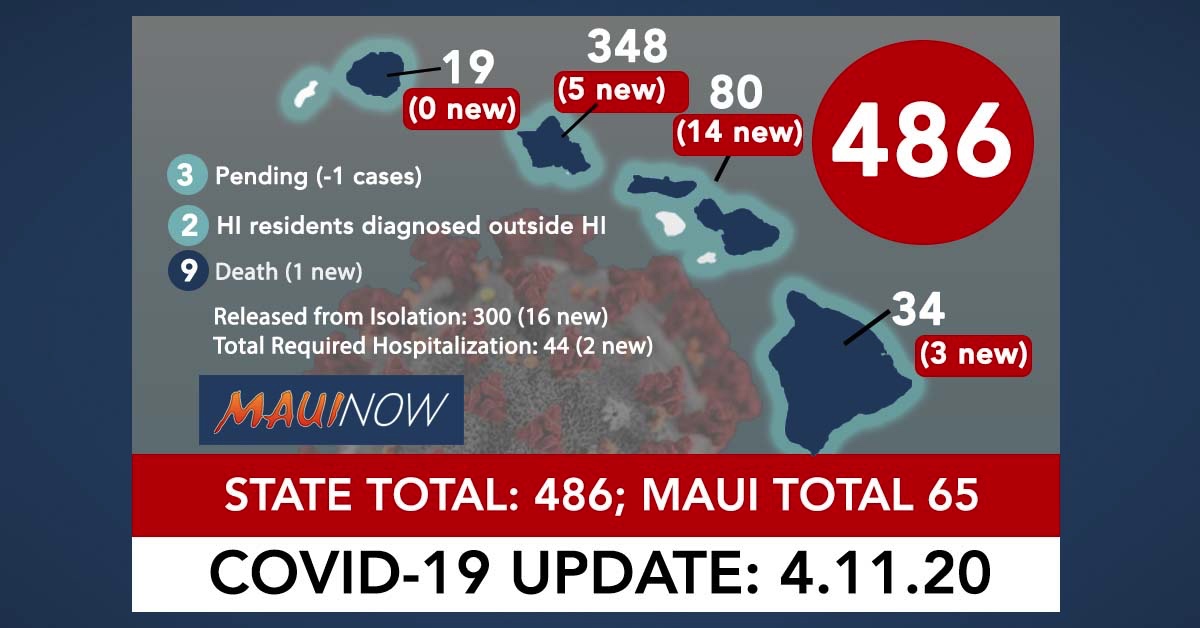 As of noon on Saturday, April 11, 2020, there are 486 cases of COVID-19 identified in Hawaiʻi with 21 new cases. Shortly after the noon update was released, the State Department of Health announced a ninth COVID-19 related death in Hawaiʻi in a woman on Oʻahu, over 65-years-old with underlying medical conditions.

The total includes 5 new cases on Oʻahu, 14 new cases in Maui County (yesterday’s count was adjusted upward by one following an update by the state Department of Health), and 3 new cases on Hawaiʻi Island.  There are now 3 pending cases, where the island of residency has not been determined, which is down by one from yesterday’s count.

There were also two cases earlier that were identified as Hawaiʻi residents who were diagnosed outside of Hawaiʻi.

The Hawaiʻi State Department of Health reports that there were 300 individuals released from isolation; and 44 cases that have required hospitalization.

Maui County has 14 new cases for a total of 80 confirmed positive (yesterday’s count was adjusted upward by one by the state Department of Health following their initial noon update). Of the 80 cases in Maui County, at least 40 have been released from isolation, and 7 have required hospitalization.

Maui County now has three COVID-19 related deaths. Maui reported its first COVID-19 related death on Monday, April 6, of an adult male over the age of 65 with underlying health conditions and exposure to travelers. The second Maui death was announced on Wednesday, April 8, and was an unattended death. A third death in Maui County reportedly occurred on April 7, but was reported in the state count on Friday, April 10. This third case involved an elderly individual who was in the chronic care unit.

On Wednesday, county officials announced that there is a cluster of COVID-19 positive cases identified in employees at Maui Health. The cluster cases on Maui are not new and were accounted for in earlier totals.  The hospital adjusted the cluster count upward on Friday afternoon to 19 individuals; and state officials adjusted the count upward to 29 on Saturday The Maui positive count includes at least one resident of the rural community of Hāna in East Maui and at least two residents of Molokaʻi.