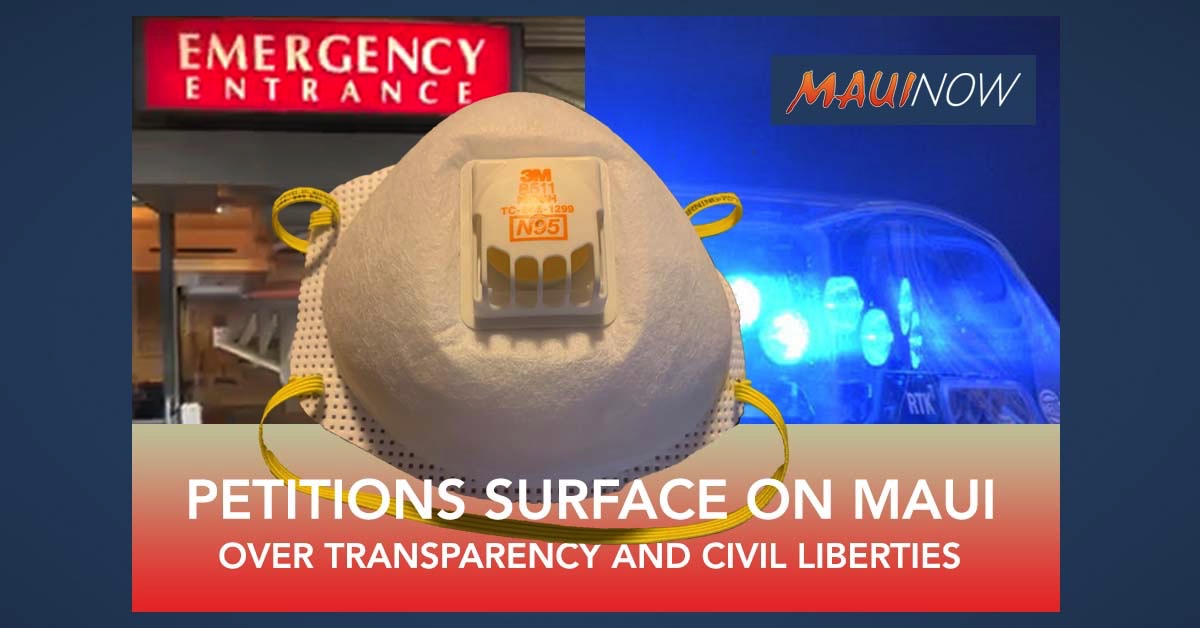 Several petitions are circulating online, calling for immediate resignations of Maui hospital and government officials, and more action from the state to save local businesses.

The largest of the petitions is a call for the removal of four hospital leaders at the Maui Memorial Medical Center where a cluster outbreak of the COVID-19 virus has been linked to at least 27 confirmed positive cases. An additional four individuals are under investigation for potential links, and 194 patients have been notified after receiving care by affected healthcare workers.

State health officials say an investigation reveals that two wards at Maui Memorial with the highest concentration of infection included the Pediatric Telemetry Ward and the Skilled Nursing Facility.

The petition states that the leaders “continue to implement abusive and dangerous policies, putting both healthcare staff and the Maui community at risk,” during the COVID-19 crisis. The petition also claims “lack of transparency,” late response to workers who wanted to wear PPE that they bought on their own, and “fear of retaliation” among workers.

The petition specifically calls for the resignations of four hospital executives.  By 12:43 p.m. on Monday, the petition at change.org had garnered 4,234 signatures toward a goal of 5,000.

The hospital instituted a change in policy regarding mask use at the end of March and responded to questions from the community during a Maui Now interview last week.

In an open letter to hospital employees and physicians on Friday, Maui Health CEO Michael Rembis continued to say that the safety of caregivers was a “first priority.”  He had planned to institute a town hall call-in for employees at different times this week to get feedback and hear concerns.

A separate petition, also started two days ago, criticizes the Mayor for roving roadblocks conducted over the weekend in which police and National Guard personnel worked together to enforce stay-at-home orders.

The petition claims the action put commuters at risk and undermined civil liberties and constitutional rights.  That petition had 671 signatures by mid-day today.

Mayor Victorino addressed the concerns during a morning radio interview today.  He said the curfew and roving checkpoints are to get people aware and be mindful of what’s going on.  “Don’t be out there unless you have to be.  It’s not to inconvenience.  It’s not there to take away your liberty or your constitutional rights and the liberty that you enjoy in America. It’s really for the welfare, safety and health of all of you,” he said.

The petition strengthens efforts led by the Chamber to urge state action including deferment of GET collection and other measures to help businesses survive extended interruptions and closures. Many business leaders indicated that federal assistance will not go far enough to stabilize and sustain their businesses until they can reopen.

“The overwhelming response to this petition is a clear indicator that more needs to be done to support local businesses during this difficult time,” Sherry Menor-McNamara, President & CEO, Chamber of Commerce Hawaii said. “All levels of government must be responsible for supporting our local businesses—we need more aggressive statewide efforts. The stabilization measures we are requesting now will allow all businesses to survive long enough to reopen and contribute to long-term recovery efforts.”

At least nine states, including New York, Florida, Colorado and Maryland, have all provided some type of relief to businesses regarding sales tax collection. These states have either pushed back the deadline for collection, or have removed penalties for late payments.

The Chamber wrote to Governor Ige on March 25 to urge him to suspend GET and tax collection, and on March 20 to call for several actions, including expedited expansion of testing and testing sites, limited rent and mortgage relief by government, loan forgiveness programs and pausing any government debt payments.