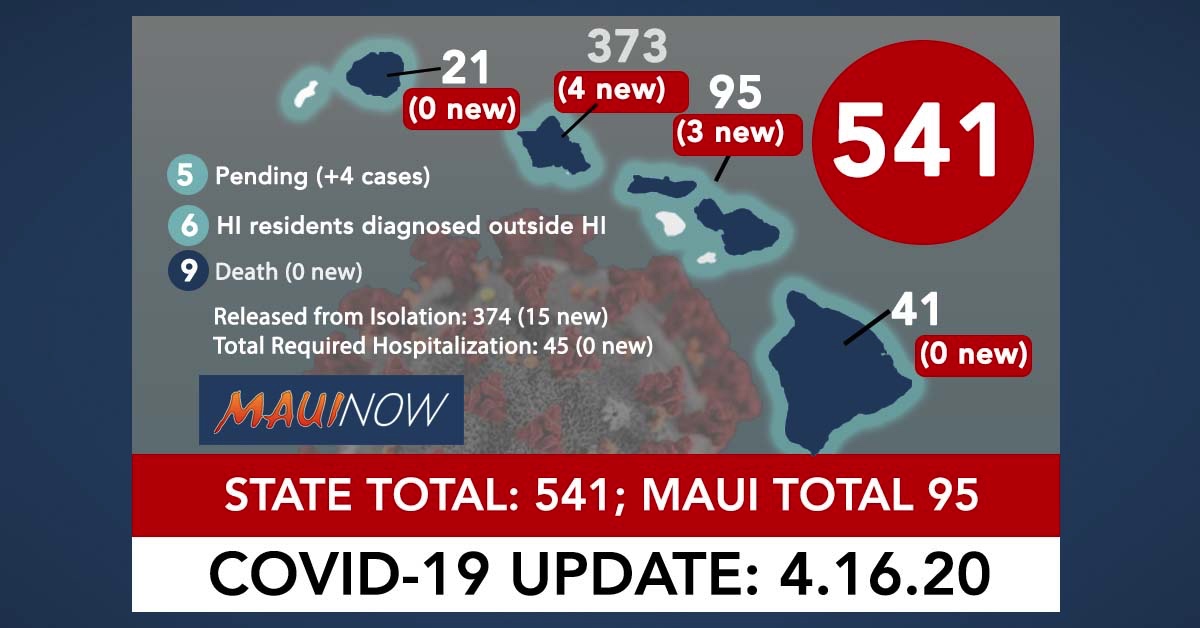 There is now 5 pending cases, where the island of residency has not been determined, which is up by four cases from yesterday’s count.  There were also six cases that are identified as Hawaiʻi residents who were diagnosed outside of Hawaiʻi.

The Hawaiʻi State Department of Health reports that there were 374 individuals released from isolation; and 45 cases that have required hospitalization.

Maui County has 3 new cases for a total of 95 confirmed positive. Of the 95 cases in Maui County, at least 44 have been released from isolation, and 7 have required hospitalization.

There is a COVID-19 cluster on Maui at the Maui Memorial Medical Center.  The state adjusted the Maui Hospital cluster count upward to 34 individuals under investigation.

There’s also one home health patient with Hale Makua Health Services and a nursing home resident from Hale Makua Kahului that tested positive for COVID-19.  The nursing home resident was one of six residents at the facility who were potentially exposed during their stay at Maui Memorial Medical Center prior to being admitted to Hale Makua Kahului. The nursing home resident who tested positive, initially received a negative test result on April 9. Because this individual was treated on the MMMC unit with the COVID-19 positive cluster of workers, the resident was re-tested on April 13, which resulted in the current positive received on April 15. The resident is currently asymptomatic and in isolation.  Out of an abundance of caution, all employees who had any contact with the patient are also self-isolating and have been tested.