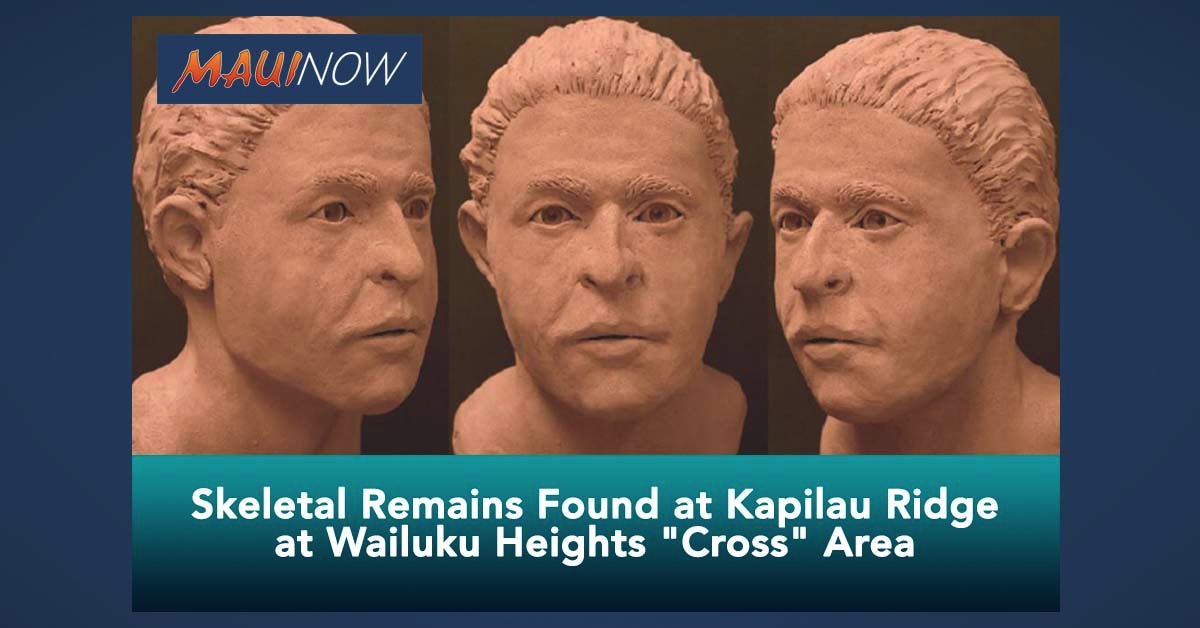 The Maui Police Department is requesting the assistance from the public to help identify the individual depicted above.

On Sept. 7, 1981, hikers discovered the skeletal remains of an unidentified person while hiking to “The Cross” in Wailuku Heights on Kapilau Ridge.  It was determined through an examination that the remains had been there for one to three months.

The individual was described as being a male, approximately 5’10” in height and possibly weighing between 160 to 170 pounds with shoulder length brown hair.

Police say “it is likely this individual had moved to Hawaiʻi from somewhere on the mainland because his teeth exhibited signs of exposure to fluoridated water.” Prior to his death, he may have had recent teeth extractions. It is estimated this person may have been between the ages of 25-35.

Police say information obtained through the original investigation revealed that “a credible source said the male went by the name Ed and was described as being Hapa Haole (Caucasian mix) and having a medium size goatee at the time of death.” Police say “Ed” was also described as a “rapid talker” who talked a lot. Police say the person stated “Ed’s” death occurred around the end of July to the beginning of August, 1981.

At the time this case was reported, there were no reported missing persons matching the description of “Ed” in the county of Maui. Several missing persons leads were reported to the Maui Police Department from several locations in Hawaiʻi and the mainland, all were excluded through dental records or they had been located.

In 1988, the Federal Bureau of Investigation produced a sketch for the Maui Police Department which was released several times which did not result in any credible leads identifying “Ed”.

In 2010 a DNA profile was developed and uploaded into several systems which has not resulted in a match at this time.

Additionally, a biological profile was developed which suggests “Ed” is most likely of Hispanic and European ancestry.

If anyone has any information to the identity of “Ed” or may have a relative matching “Ed’s” description who was reported missing around sometime in 1981, please contact Lieutenant Nelson Hamilton at 1-808-244-6441 or Crime Stoppers at 1-808-242-6966. This case is also referenced on the NameUs website at www.nameus.gov case number UP68367.